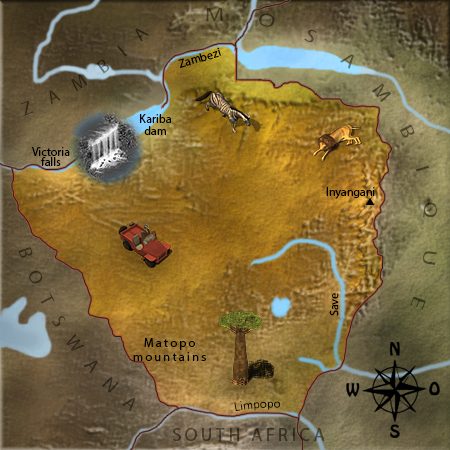 Mhoro, welcome to Zimbabwe, the beautiful country in southern Africa.

Zimbabwe lies in southern Africa. It has no access to the ocean and is therefore called a landlocked country. Zambia lies in the north, South Africa in the sounth. In the west there is Botswana. In the east is the border to Mozambique. The highest mountain Monte Binga is 2440 meters tall. The Eastern Highlands are renowned for their great natural beauty. Zimbabwe lies in the tropical zone. The climate is moderate, though, because it is situated on a highland.

The Zambezi is the Lifeline of Zimbabwe 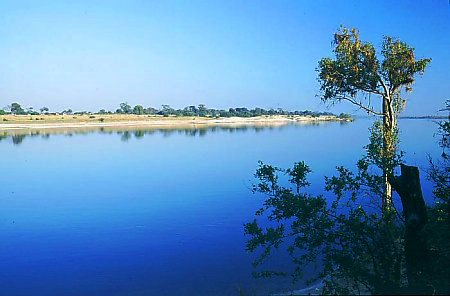 The Zambezi is the fourth longest river in Africa. With a length of 2574 kilometers it is about half as long as the Nile. Even though the river is very long, it is only crossed by eight bridges. The Zambezi is famous for the spectacular Victoria Falls. Its source lies in Zambia. It flows through Angola, Zimbabwe, and Mozambique and merges into the Indian Ocean in a huge delta. Many call the Zambezi the prettiest river in Africa because it flows through beautiful landscapes and creates large, fruitful deltas.

Lake Kariba, the dammed Zambezi forms the largest body of water in southern Africa. On the map you can see the blue band of Lake Kariba. The reservoir was constructed to produce electricity. Unfortunately the constructors and the government did not consider the people and animals living in the valley. The people who lived in the valley had to give up their homes and move away. The valley was flooded and thousands of wild animals drowned. Committed conservationists saved thousands of mammals in the “Operation Noah”. They were brought to an island in Lake Kariba. The wildlife stock has recovered today. From the city of Kariba you can visit the lake and the many small islands on boat tours. Going for a swim isn’t possible in the lake though, because many crocodiles live in the flat shore areas. Some fishers and women who aren’t careful fall victim to the crocodiles every year. The southern shore was turned into a nature reservoir because of the many types of birds, fish, and wildlife. The Kariba water reservoir provides energy for Zimbabwe and its neighboring country Zambia.

The Matopo Mountain Range, a Museum of the Stone Age 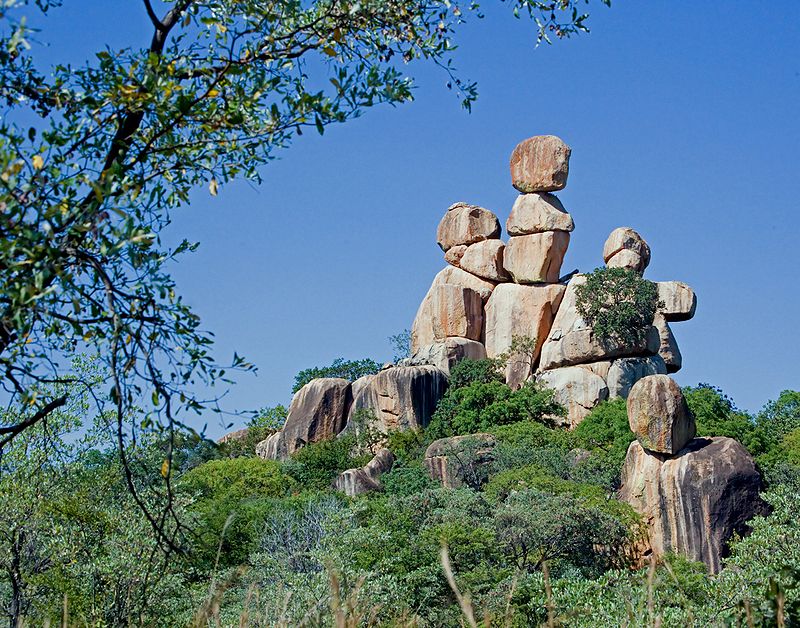 The Matopo mountain range lies south of the city Bulawayo. It is home to one of the most extensive collections of Stone Age art and cave paintings in southern Africa. The mountain range consists of hills made of granite and canyons with bushes growing on them. The terrain is very confusing, which is why the locals hid their cattle, women, and children in the mountains here during times of war. The area is the religious center of the Shona. They believe that their God Mwari speaks to them from the boulders. This is where they bring their sacrifices and take part in their ancient rituals. The grave of Mzilikazi, the founder of the Matabele Kingdom, lies in this mountain range. Since 2003 it belongs to the UNESCO World Heritage program. 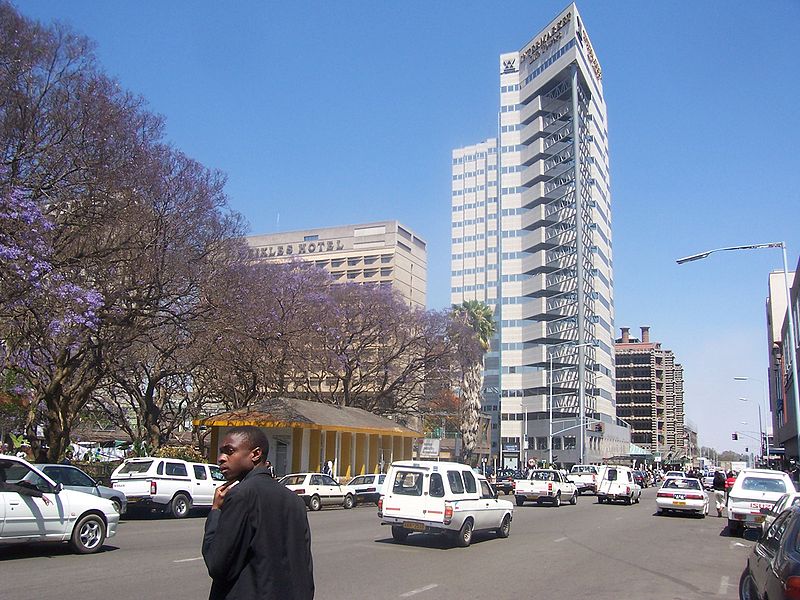 Harare is in the northeast of Zimbabwe. The modern, open city lies on a plateau. There is a dry savannah around the city. The journalist Cecil Rhodes founded the city in 1890 on the area of the Shona chief Harare. He had named the city after the British Prime Minister Salisbury. When Zimbabwe became independent it was renamed Harare, to honor the former chief. In the language of the Shona Harare means “somebody who does not sleep”. Today around 1.6 million people live in the city. In the townships around Harare there are probably twice as many people. With its large train station and the international airport Harare is the centre of Zimbabwe. The wide streets downtown are filled with blossoming trees. Because of the many parks and gardens, Harare is also called garden city. “Sunshine City” is another name that comes from the sunny climate. 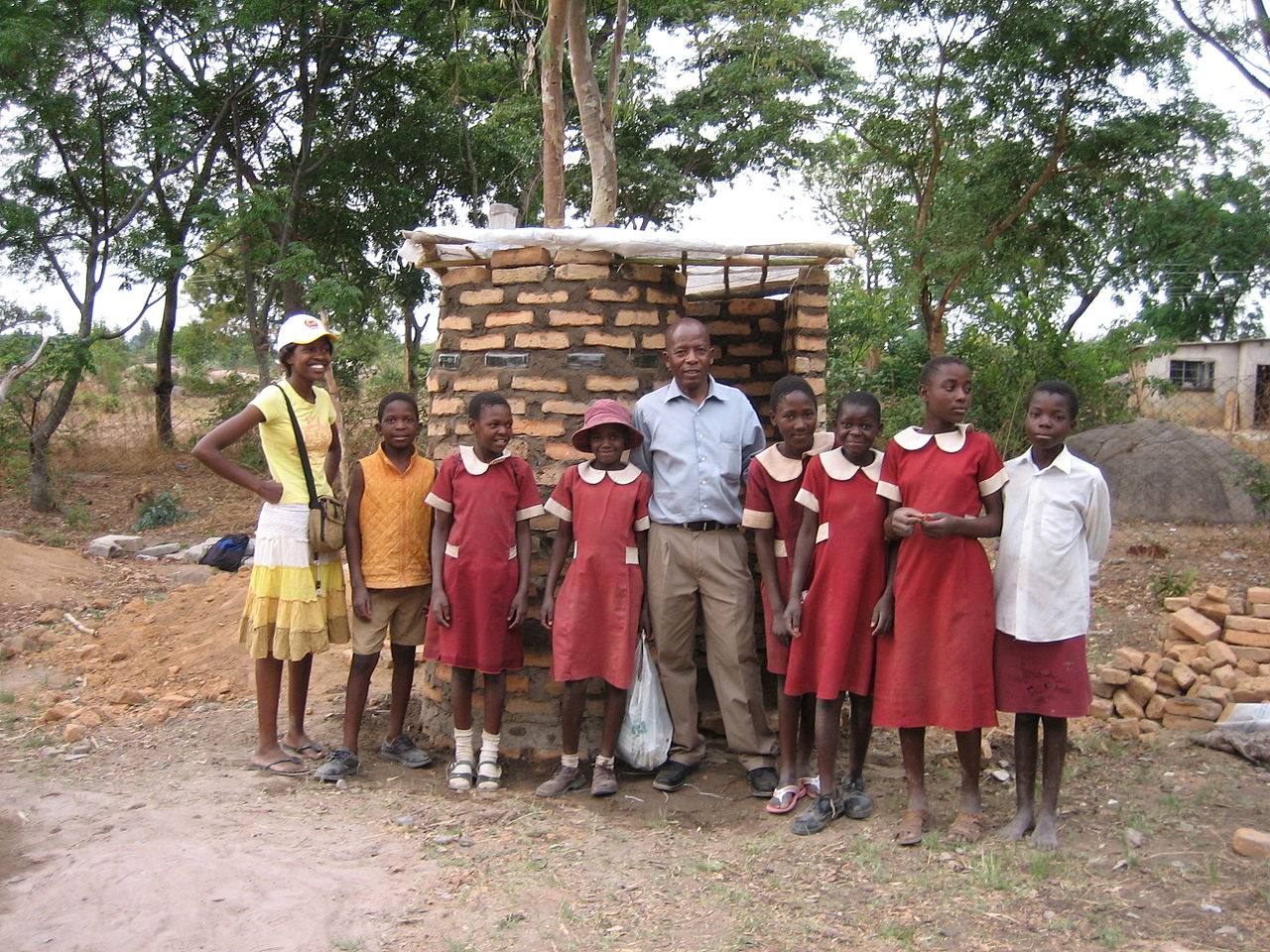 Zimbabwe is the country of the Shona and the Ndebele. Zimbabwe means “house of stone”. The name comes from the Shona, who built houses of stone a long time ago. Even today children and their families live in similar houses of stone like their ancestors. The houses are usually round, topped with a roof of straw and only consist of one room. The whole family sleeps in this room. English is the official language in Zimbabwe but in the streets you hear the languages of the Shona and the Ndebele. On the left you see students and their teachers inaugurate the new built toilette. 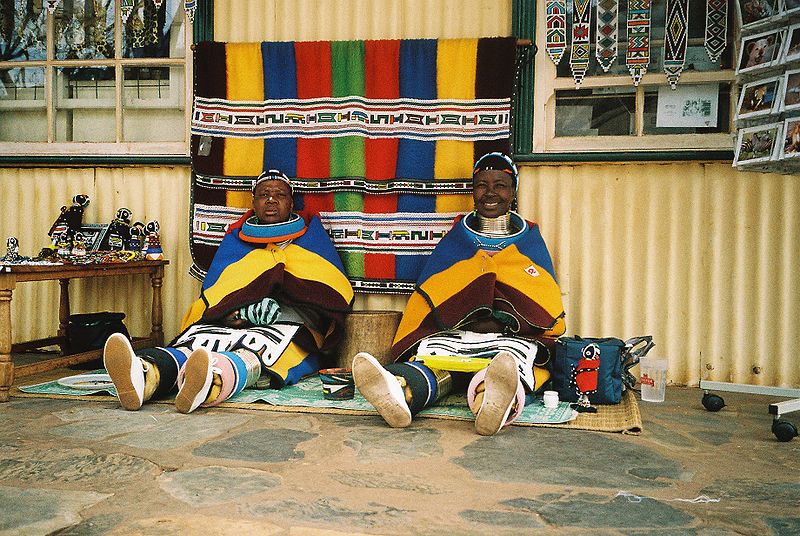 The Shona in the north provide for themselves with agriculture. They plant corn and millet and breed cattle. Cattle play a large role in the community. The amount of cows you have determines how wealthy you are. The men pay their bride price with cattle. The communities used to be lead by a chief. He split the land and took care of legal issues. Because of the modern lifestyle this tradition has changed. The Ndebele from the south are known for their colorful houses. The painting of the houses is a woman’s job. They spend months painting their houses with colorful patterns. They help each other when doing so. The Ndebele women wear colorful jewelry as well. They wear rings around their neck that they never take off. 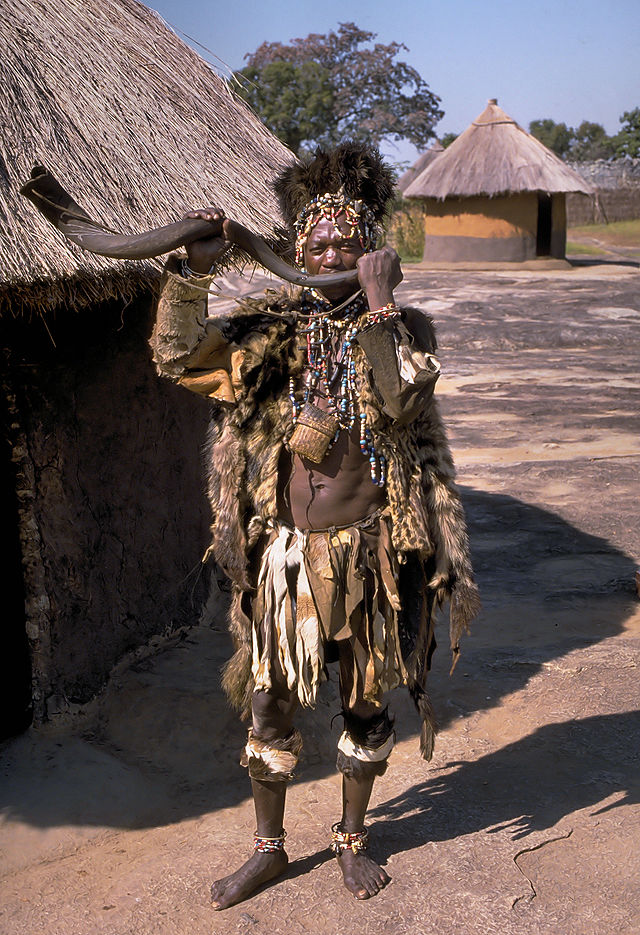 Zimbabwe’s inhabitants are pragmatic when it comes to religion. The British colonial power had installed the Christian belief. Around half of the population goes to church and celebrates the Christian holidays. But many still stick to their old African beliefs like ancestry Gods or the practice of magic. Witchdoctors like the man on the left are renowned and are visited more often than westerns doctors. They have great knowledge of nature and know of all medical herbs and how much of a poison will work as medicine. They mix herbs in magic rituals while they conjure the power of the ancestors. 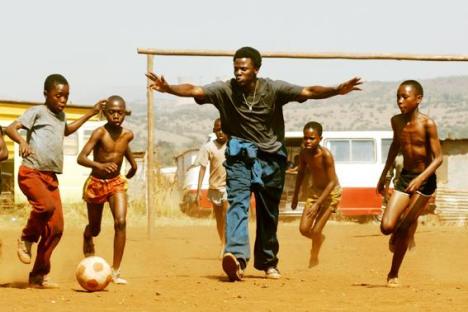 In Zimbabwe many parts of the ground are not covered with asphalt yet. Especially in the rural areas the people live on soil that has been packed hard by walking on it. The children play on this ground or in the sand. One of their favorite games is soccer with marbles or a type of hide and seek. It's an easy game to play and is much fun. One player builds a little mound of sand and hides a small fruit, a nice stone, or the cap of a bottle in it. The other children sit around the mound and sift through the sand. The one who finds the object first, wins. 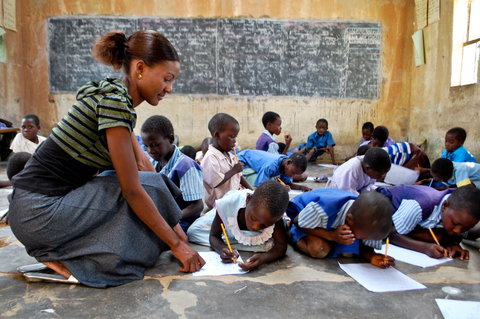 Zimbabwe’s schools used to be a role model for African countries. Since the dictator Robert Mugabe is in power, the schools have worsened. Many teachers are underpaid and have to earn extra money on the side. Most parents can’t afford the school fees and uniforms. They cost between 50 and 200 Dollars a year. That’s a large amount considering most people only earn 500 Dollars a year. In the last couple of years many schools have closed, since the government can’t afford them anymore. The few schools that are open are overcrowded. When needed, people become very inventive though. Volunteers take over teaching. When there are no classrooms available, they teach the children outside. The kids meet under the trees and write their assignments in the sand.

Zimbabwe used to be considered the breadbasket of Africa. The soil in the highlands is very fertile and can be used as farmland easily. Corn, soy, and tobacco grow here. Unfortunately, due to the land reform the yield decreased drastically. During the land reform, white farmers were expelled from their farms. Their farms were then given to the black populace. Most of them were notexperienced in dealing with large farms. The yield went back so far that Zimbabwe had to import grains for a while. Zimbabwe has many precious resources such as gold, platinum, nickel, copper, tin, and diamonds. But the energy and mining sectors have almost come to a standstill as well. The production of gold sunk by two thirds between 1998 and 2007. 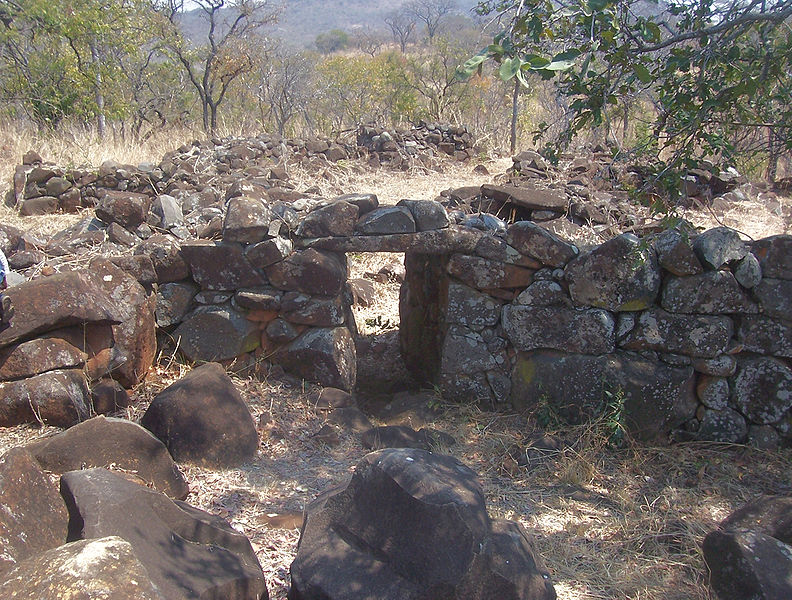 The magic of the past can be found almost everywhere in Zimbabwe. The rural beauty and the favorable climate have been attracting tribes and peoples for centuries. The peoples of the early days left behind impressive cave paintings. Even early settlements are still preserved. In 10 000 year old ruins of cities it is still possible to recognize urban structures. Even old mines where iron and ores were mined are still preserved. When you travel to Zimbabwe there are three places you have to visit: 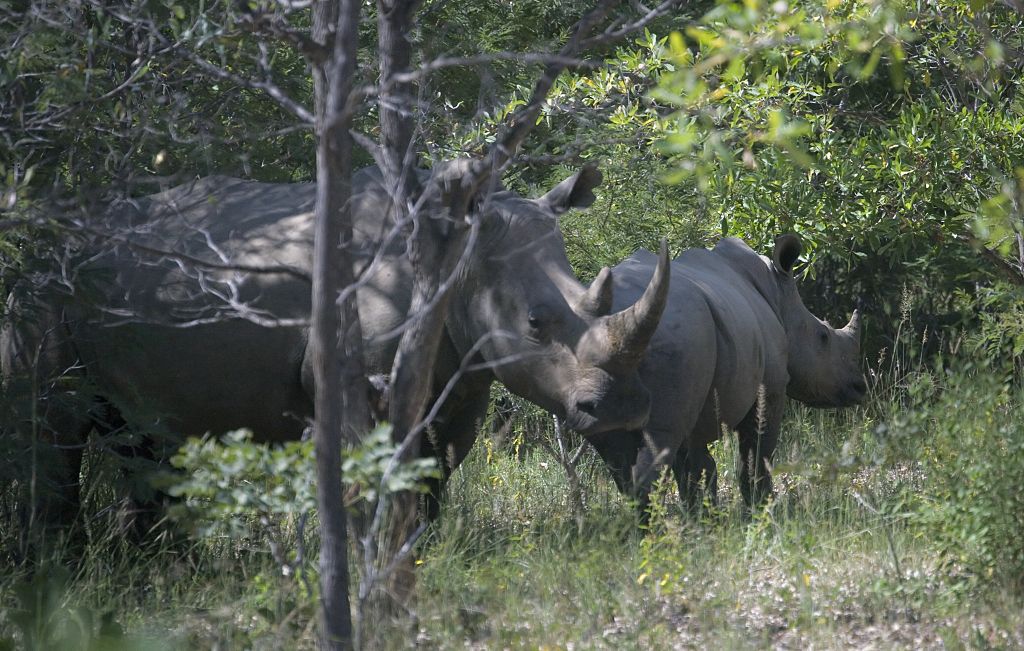 Many national parks have been created in Zimbabwe, so as to protect the rich wildlife. More than 12 percent of its area is reserved for animals. Zimbabwe’s largest national park is the Hwange National Park with its diverse landscapes. The Mana Pools National Park is one of the World Heritage areas in Zimbabwe. The park is on the Zambezi River. Rain turns it into a tangle of swamps, lakes, and islands. Crocodiles, hippos, and rhinos are at home here. Hippopotamus’, who come on to land at night, are dangerous. They overrun anybody who gets in their way with their short, stubby legs. They use their impressive jaw for both attack and defense.

More on animals of the southern savanna 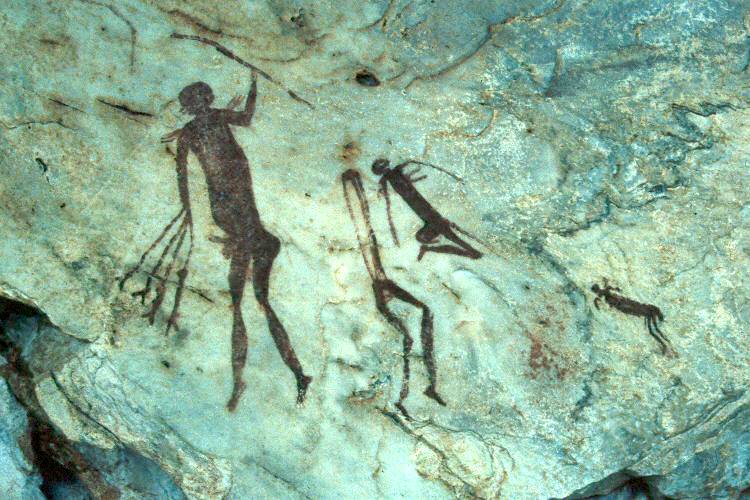 Between 50 000 and 10 000 b. C. the Khoisan and San settled in southern Africa. They moved around in small groups and lived off hunting and collecting. When the Bantu began migrating and settling on the shores of the Zambezi, the former paradise changed. They built settlements, specialized in various crafts, and began trading. They set the cornerstone for the modern Zimbabwe. 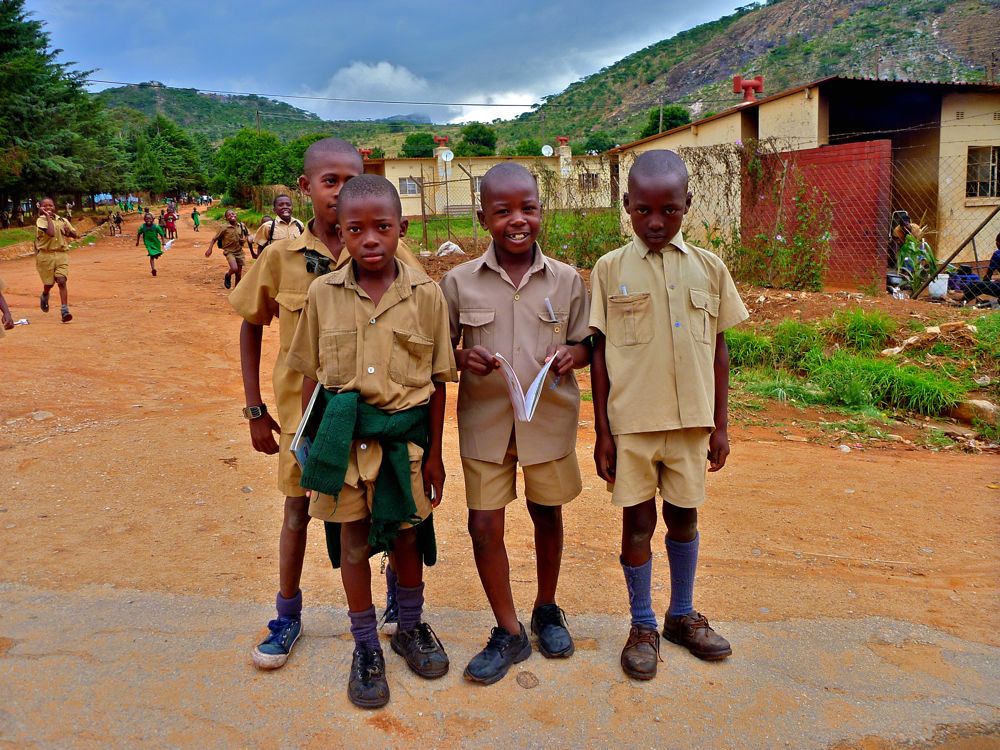 In February of 1980 Robert Mugabe was elected to become prime minister. At the same time Zimbabwe was granted full independence from Great Britain. Mugabe won the sympathy of the black population with his land reforms. He expelled the white farmers and gave their land to Africans. He revised the constitution, became president and installed an authoritarian rule. He forbade free press and persecuted critics and members of the opposition. It came to violence against the population again and again. Many Zimbabweans left the country; most of them went to South Africa. A couple of droughts weakened the agriculture. Following international critique, Mugabe had to share the power with the oppositional party. Both parties promised different reforms. But the problems in Zimbabwe have not been solved yet. Many of the emigrants have not returned, even though their help is necessary to rebuild the economy. The most important task for Zimbabwe is to ensure a regular school-system. Primary school has to be affordable for everyone.