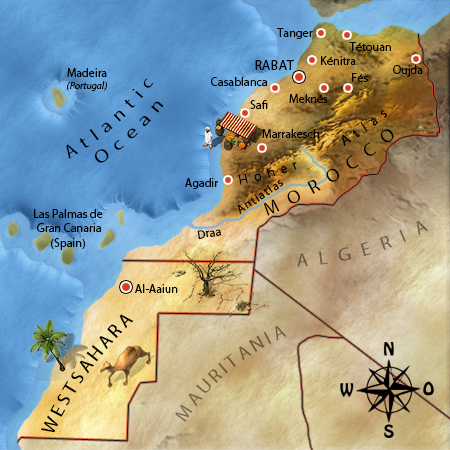 Western Sahara is a desert area with a long coast on the Atlantic Ocean. To the north lies Morocco, to the south Mauritania. Western Sahara shares its eastern border with Algeria. On the coast there are only two small towns with a harbor.

Western Sahara consists of an impressive desert landscape with oases filled with palm trees and deep river valleys. The largest part of the landscape consists of a rock and boulder desert. Many parts of the country are covered in sand deserts as well.

The southern area is marked by dried out river valleys, named wadis. They carry water only during the rainy seasons. The Saguia el-Hamra is the longest river in the country. It empties into the Atlantic and is very important for the survival of the oases. Western Sahara is a desert environment. During the day temperatures can reach a whopping 50° while it cools down to chilly 10° at night. It does not rain very often, which is typical for a desert environment. Near the coasts fog can be seen quite frequently though. 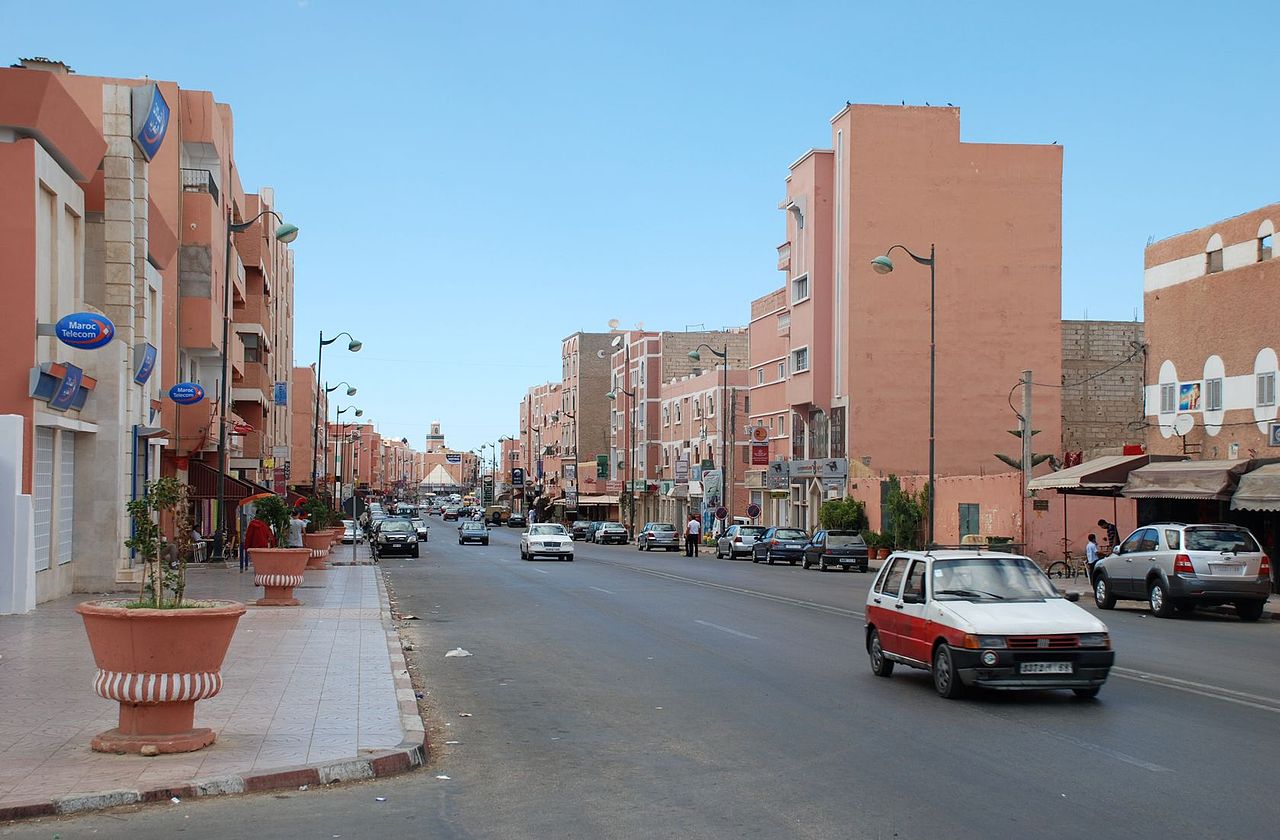 The city El Aaiùn is also named Ajun.Spanish occupiers had once founded Ajun as a garrison town. When the mining of phosphate began about 70 years ago the small town grew to a large and modern city. European business men wanted fancy hotels, bars, shopping malls, and comfortable lodging. Today the desert city counts around two-hundred-thousand inhabitants. Ajun lies 25 kilometers away from the Atlantic in a hilly desert area. The name El Aajùn means “the springs”, since only the ephemeral Saguia el Hamra river with its groundwater supplies water. Only here can you find densely growing bushes with tamarisks. Towards the end of the rainy season, the river dams up to a lake. It is the largest sweet-water lake of the country. Ajun is near the only larger street that connects Morocco with Mauritania.

The inhabitants of Western Sahara are named Sahrawi. The name comes from the Arabian word for Sahara. The Sahrawi used to earn their living by trading using caravans whilst crossing the deserts. Even today, many of them still live off of breeding camels, sheep, and goats.

The society used to be very hierarchical, slaves belonged to the every-day business. Since the liberation movement of the last century though, steep hierarchies and human trafficking are not common anymore. The official language is Arabic. Most speak Hassania though, an Arab-Berber dialect. Most people here are Muslims. They are very sociable and hospitable. Many live in tent cities.

Music plays an important role for the Sahrawi. They know ten different instruments. Some of these instruments are only played by men, like the long-necked lute spit, and some only by women like the bow harp ardin. Both instruments are already known from the old Egyptian times. Women usually accompany their singing with a kettle drum named t’bal.

How do you Live in a Tent? 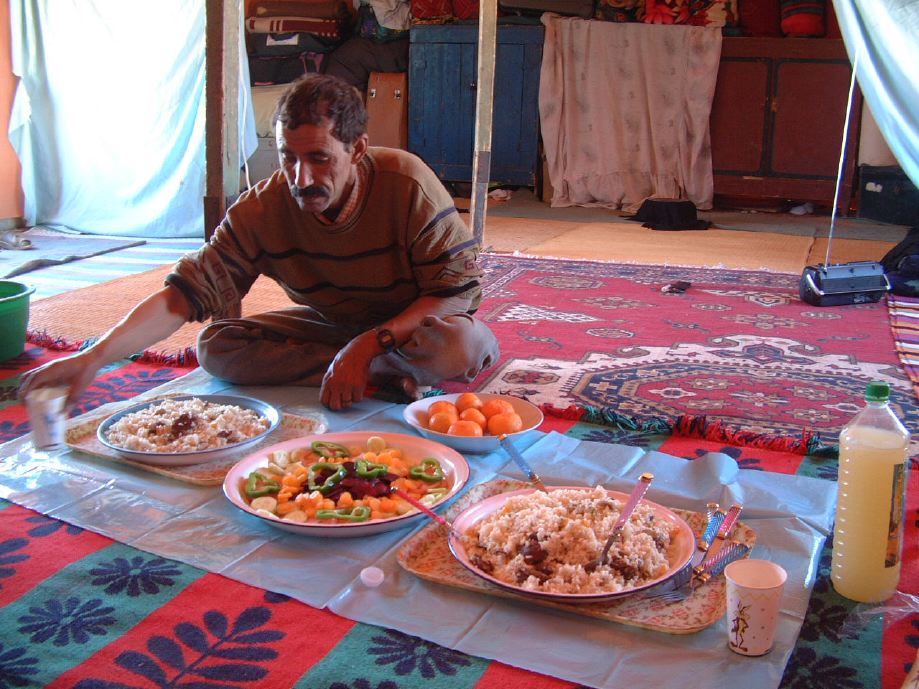 The Sahrawi’s used to be called “the ones with the black tent”. The tents are actually white to reflect the heat from the sun though. The tent is furnished the way a one-room apartment would be. There is no running water though, so no showers and no toilets with running water. People sit on the floors here since there aren’t any tables. Even during dinner and meals everybody sits on the floor. They do not sit in the dirt though, but on very stylish carpets. As you can see on the photo, a carpet sweeper is always nearby. 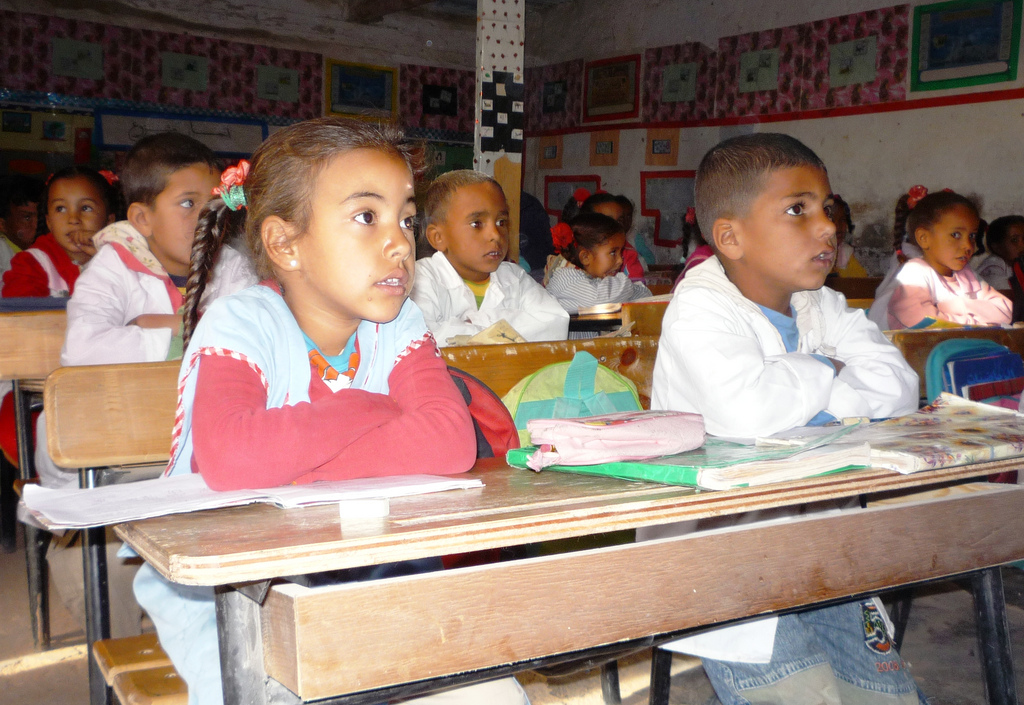 Refugee schools, international school, all kinds of schools can be found in Western Sahara. Only normal schools barely exist here. The Sahrawis have built a well-functioning school system in their tent-cities. The classes are organized mainly by women. They create the schedules and teach the classes as well. The general classes are similar to those in European schools. The biggest difference: music is a major subject. Even the youngest are taken care of; they visit the kindergarten and even receive regulated meals there.

What Children Play in Western Sahara?

The boys play soccer, even if they do not have the shoes, never mind soccer shoes. Most parents don’t have enough money to buy toys, shoes or tools for tinkering. Nevertheless, the children are very inventive. Girls learn how to play instruments or do handicraft with fabric to make - for example - carpets 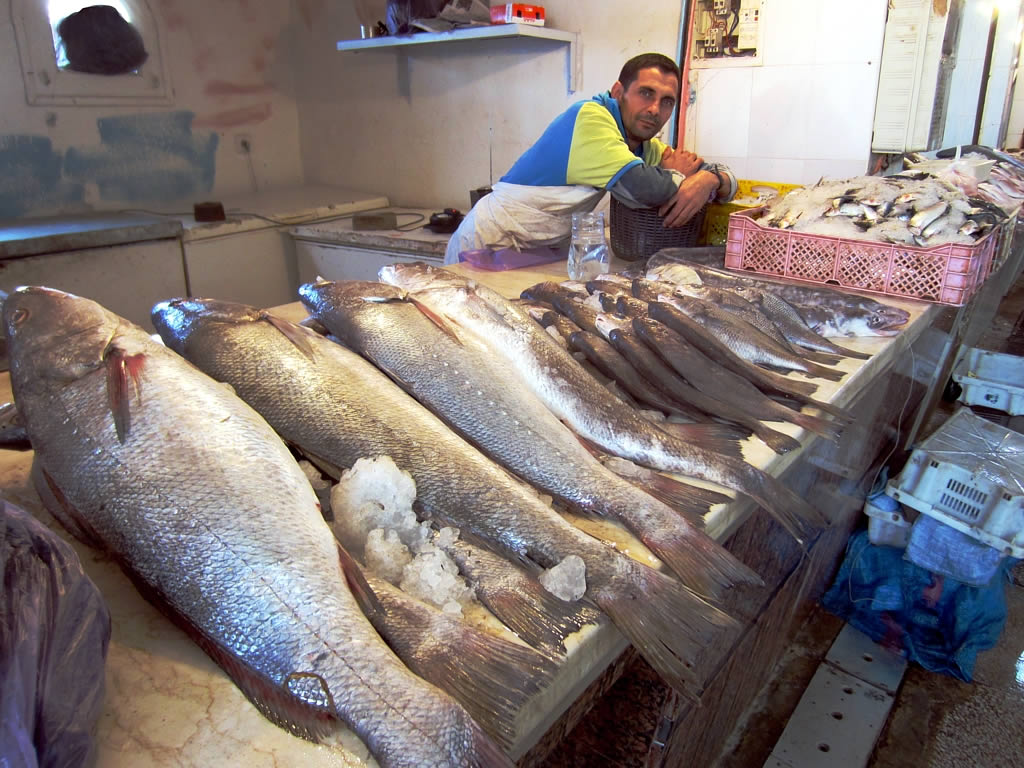 Most of the Sahrawi’s live off of fishing. Many of the former caravan leaders and merchants looked down upon the fishers. By now, many can live because of fishing. Oil and phosphate are the most important natural resources in Western Sahara. The mining of these only began a few decades ago. Unfortunately, only Morocco benefits from this. Morocco also exploits the fish reserves off the coast of Western Sahara. The Sahrawi are very angry that Morocco is employing immigrants from Morocco while they on the other hand are primarily jobless. 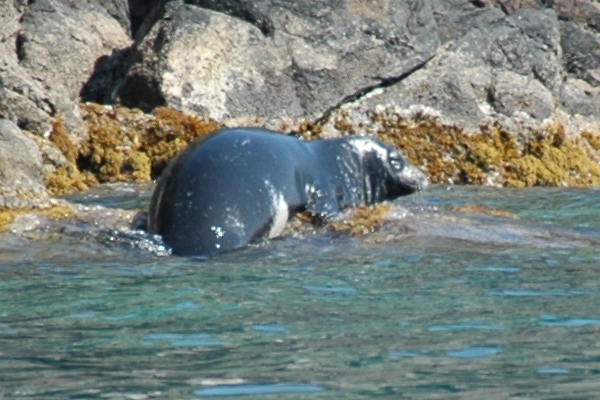 It is not easy to observe wildlife here. With a little bit of luck, you will be able to spot a desert antelope, the desert fox, spiny-tailed lizards or some gerbils. There are countless bugs, spiders and snakes hiding in the sand as well. A special attraction are the monk seals. The seals are endangered, they are very shy. That's good because they have almost been extincted. There are only around 400 to 500 animals left worldwide. They live a protected life in caves on the coast of the Atlantic Ocean, especially on the Cabo-Blanco peninsula. 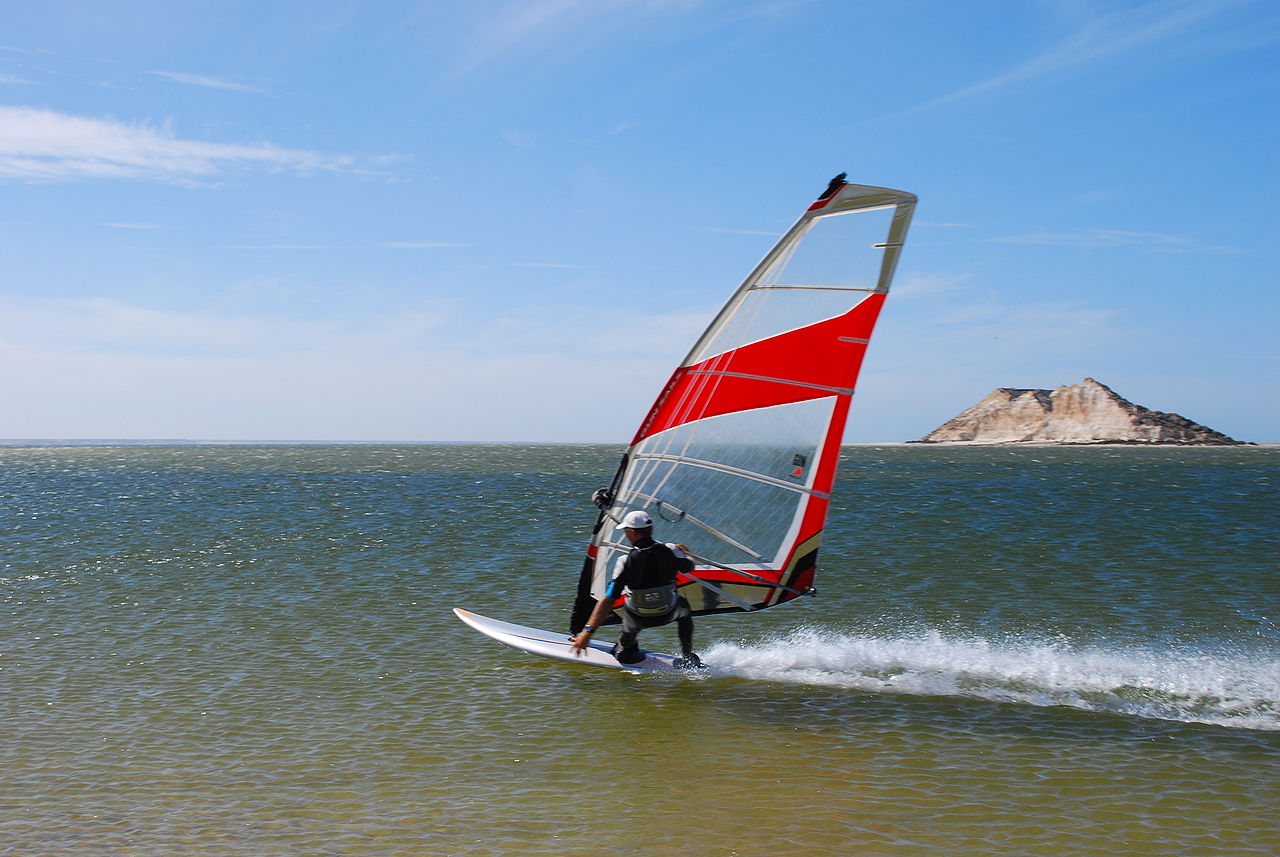 In the cities of Western Sahara, you can visit old churches and mosques. Even more exciting is the desert landscape which you can explore riding a camel or from a Jeep. Spending the night is done just like the nomads used to – in tents. Windsurfing is very popular in the south. Especially during the winter months, the wind conditions are close to perfect and the average water temperature lies around 25 degrees. Ideal for small and large water athletes.

Berbers inhabited Western Sahara for many millennia before the religion of Islam began conquering the region. Their descendants formed the core of the Almoravids. The Almoravids were religious innovators. In the 11th century they conquered a large part of northern Africa and Spain. The following heyday can still be recognized in the Spanish-Moorish culture and the impressive architecture today. The kingdom of the Almoravids began to fall apart in the 13th century. Arabian nomads from the Dui Hassan peoples pressed forward all the way to the Atlantic and began settling here. They mixed with the Berbers and coined the modern language in Western Sahara: Hassania. 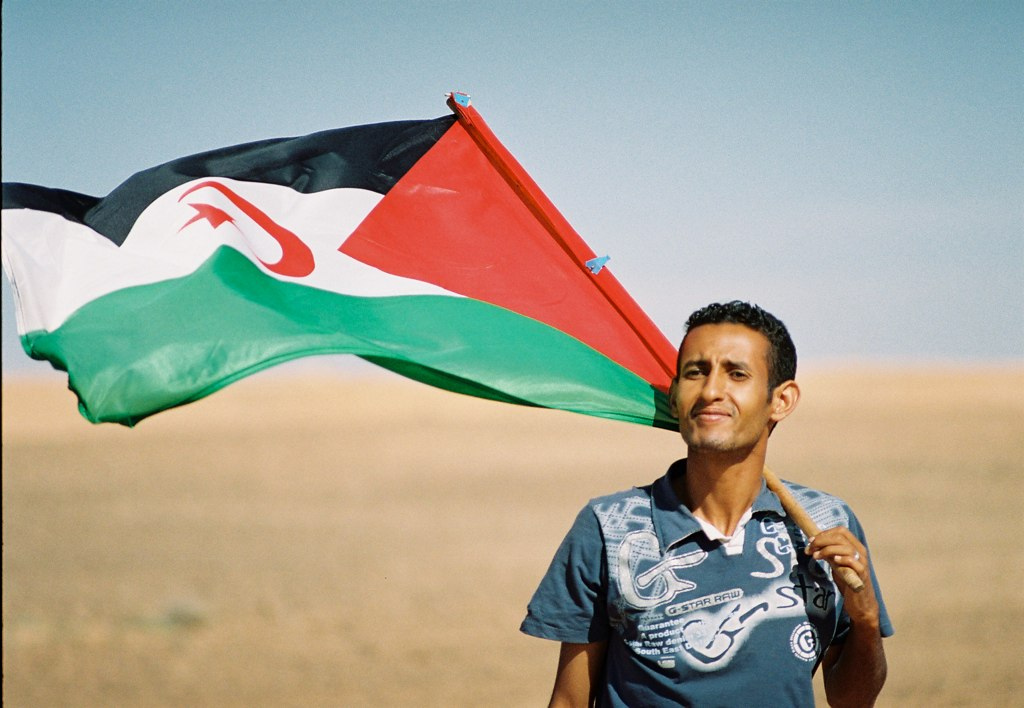 Is Western Sahara a country of its own? The Moroccans lay claim on it but the inhabitants of the coastal country see that differently. They are fighting for independence from Morocco. There have been many uprisings in the past due to the invasion by Morocco. The fight is not only about the ruling over the country though. A large factor is also the oil reserves in Western Sahara. The Moroccan government is selling drilling rights to foreign companies, even though they belong to Western Africa. The Sahrawi barely get a share of the profits. Therefore, there is no war in the country – but also no peace. Many inhabitants have fled into neighboring countries. There are currently only around 300 000 people living in Western Sahara. Near by the border, in Algeria, huge tent cities have been errected, where most of the people now live. There are no prospects for a good education and there is very little work. Especially youngsters have no future perspectives. Many continue their journey into neighboring countries or try to make it to Europe.

Did you know? You will find no mention of a border to Western Sahara in Moroccan maps. All other maps show the border.