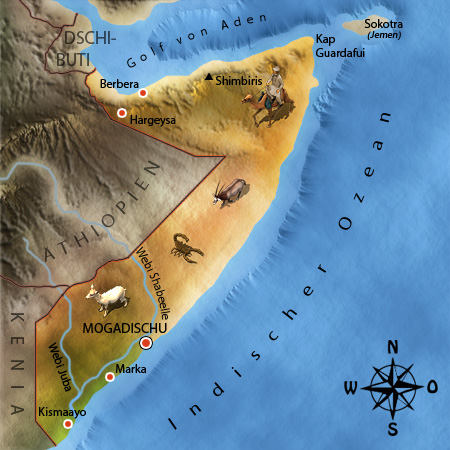 Assalaam alaikum, welcome to Somalia, the country in the "Horn of Africa".

Somalia lies in the eastern part of the African continent, on the coast of the Indian Ocean.

Somalia is shaped like the horn of a rhinoceros. The tip of the horn sticks out into the Arabian Sea. Djibouti and Ethiopia are west of Somalia, Kenya is situated in the south.  Somalia stretches along the Gulf of Aden and the Indian ocean. It has the longest coastline of the mainland with more than 3,000 kilometres.

The northern part of the country is called Somali-Land.  In this mountainous area there is the highest peak, called Shimbiris, with a height of 2460 meters. The southern part is quite flat; this is where the Somali-desert is stretching. It is known for being one of the least livable deserts of the world. Somalia is located in the Sahel, meaning it can get very dry. The fertile land is found near the rivers Shabelle and Jubba. Usually it rains a little between April and June. If it does not, the Somalis suffer from extreme drought. Unfortunately the desert in Somalia is growing larger and larger because woods are being deforested and livestock grazes down the savannas. If it doesn’t rain in a year, the savannass turn into deserts. 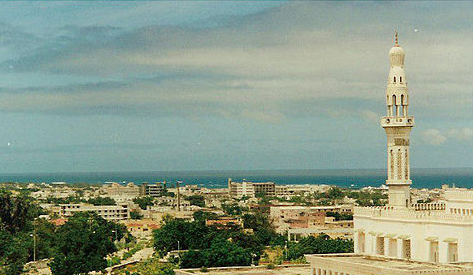 Mogadishu is located on the coast and has a large seaport. Mogadishu used to be called East Africa’s gem but large parts of it were destroyed during civil wars. The rise of the city began in the 10th century with the settling of Arabian tradesmen. Many migrants came from the Arabian Peninsula. They were wealthy and shared their wealth with the local population. A mosque was built in 1296, the Fakr-ad-Din-Mosque. It is one of the oldest Islamic buildings in Africa. Nowadays Mogadishu is the economic capitol of Somalia. At the Bakara Market you can buy nearly everything, clothes, fruit, fish, and even weapons.

The country's name comes from its original people – the Somali. The Somali are descendants of the Kushites, the inhabitants of the old Kush Empire.  They began mixing with the Arabian immigrants and took over their clan-system. A clan is a group of many related families, sometimes even with up to 100 000 members. 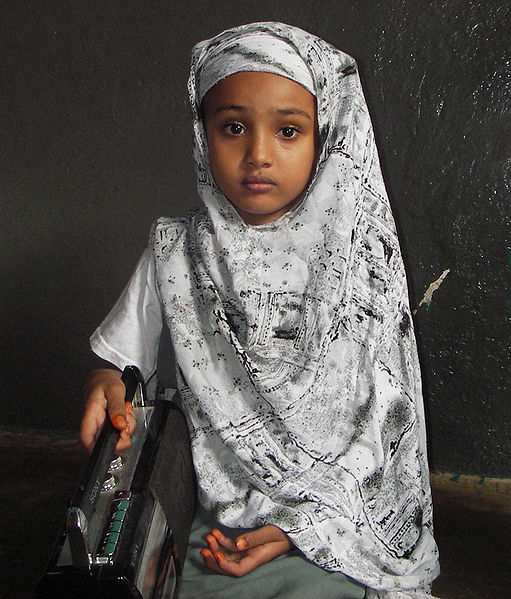 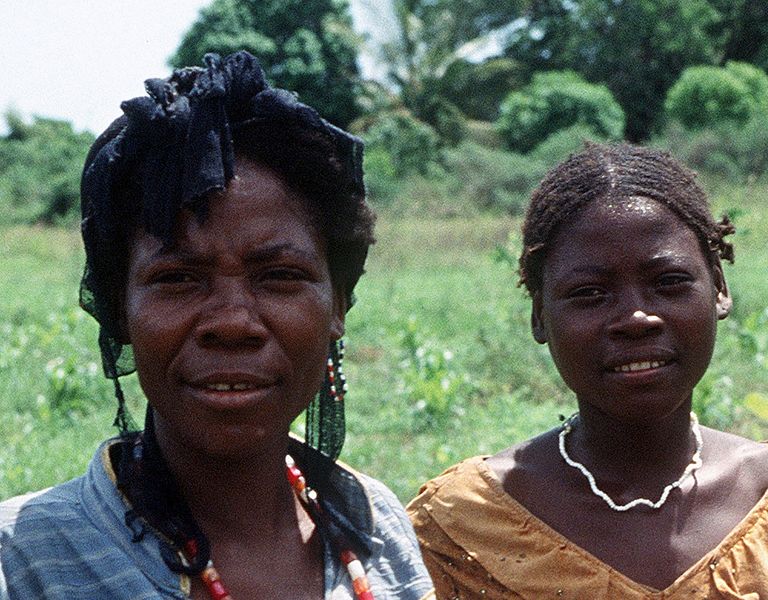 The many mosques show that most Somali are of Islamic belief. Like in many other African countries, the Sunni Islam is practiced. This African version of the Islam is not as strict as the Islam practiced in the Arabian countries. Somali and Arabian are the official languages. Still many families live as nomads. With their goats and camels they wander through the country on the search for willows and water. The men and boys protect the camels while the women and girls protect the goats and other smaller animals.

What do nomads eat and how do they cook?

Usually the women are making pancakes or cooking rice with hot butter. Vegetables are eaten very rarely; only on the markets you can purchase tomatoes, onions, and local vegetables. But there is a large selection of exotic fruits and fish. The Somali like to drink tea and yoghurt. 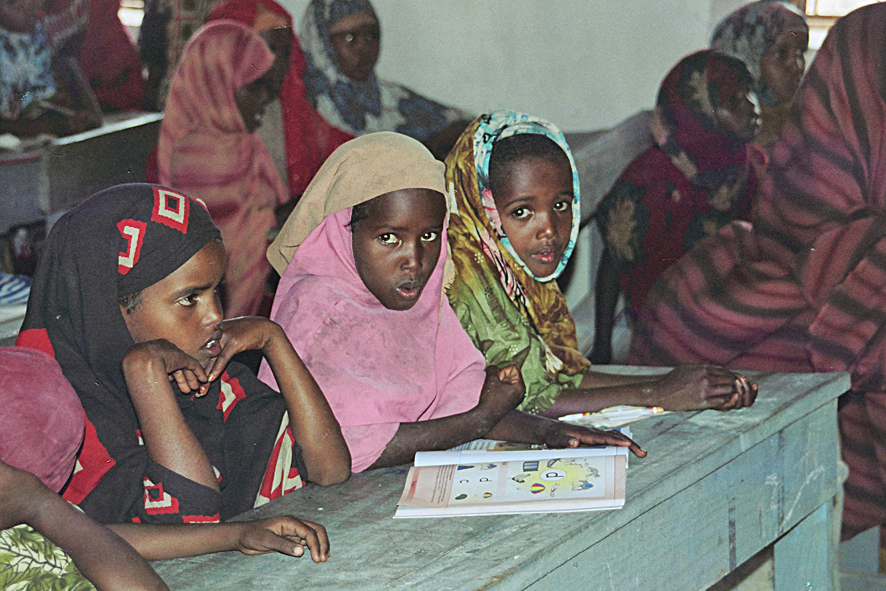 Unfortunately there are only few public schools. Many of them were destroyed during the civil war. Only ten percent of the children go to class regularly. Since there are mainly private or madrasa schools, the education is shaped by the Islam. Every child has to learn the names of all relatives. It is nearly impossible for a child to meet all his relatives though, since the clans can be up to one hundred thousand.

Many families are poor. This is why children have to take on responsibilities, like taking care of their younger siblings, very early in their life. There is almost no time to play. During daytime they work on dusty streets as shoe shiners or do small jobs for soldiers or work on the markets. In the evenings, the boys play soccer with a piece of cloth and plastic trash that they form into a ball. 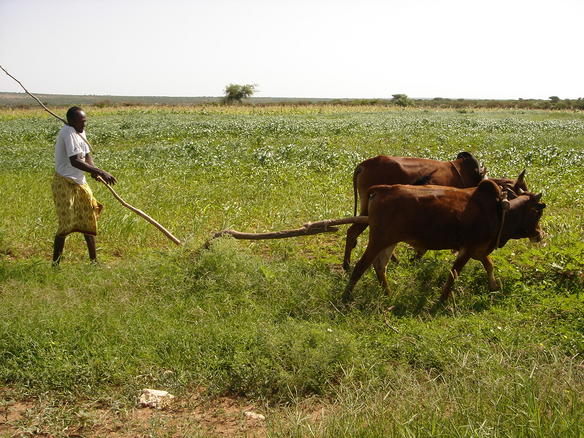 In the native language, Somalia means “go and milk”. Most of the Somalis live off agriculture, livestock, fishing, and food processing. The livestock are profitable. Somalia exports around three million sheep and goats to Saudi-Arabia, the Yemen, and the United Arab Emirates every year. Ranchers from all over the country supply the animals. For thousands of years shepherds have adapted their life to the natural surroundings. There is almost no industry since most of it was destroyed during the civil war. On average, a Somali earns around 225 dollars a year. A family can barely live from this. Which is why many children have to work. According to Unicef, many children are malnourished. The situation has improved since 2011. More and more Somalis are returning to the country, thus providing an economic recovery. Large petroleum reserves are suspected in the ground. Tourism is also on the rise in Somalia, because some of the most beautiful beaches can be found in the Gulf of Aden. It is very warm and sunny; divers can explore unique coral reefs here. 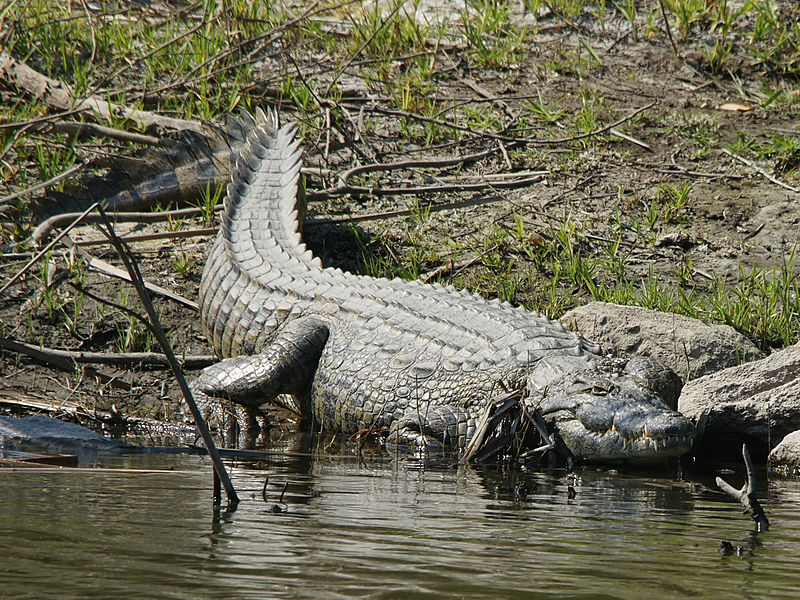 Somalia once was famous for its leopards. The leopards are hunters between savannahs and woods. But wild animals like crocodiles, elephants, giraffes, lions, antelopes, zebras, and many poisonous snakes have become rare in Somalia. The big animals have only survived in national parks like the Kismayu National Park.

Many visitors are drawn to the cave paintings in Laas Geel in Hargeisa. The paintings can be dated back to somewhere between 9000 and 6000 BC. They show that the settling in Africa's East has happened millennia ago. The Garesa Palace, an impressive building from the 19th century, can be found in Mogadishu. A typical landmark of the city is the Arba Rucun Mosque, which was built in 1269. A cow is depicted on the cave painting on the right in the picture. 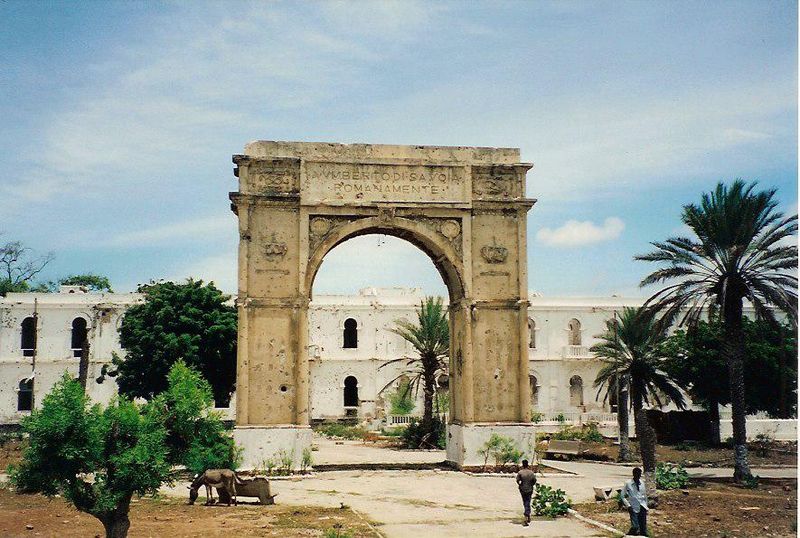 There are many antique, pyramid-like buildings, mausoleums, and ruins of old cities in Somalia. They are remains of the empire of Punt, which was trading with Egypt, Greece, China, and India. Punt was known as “Myrrh Country”. Myrrh, spices, gold, ebony and ivory, furs, and cattle were traded. The pharaoh Hatshepsut even sent an expedition to Puntland to purchase these luxurious goods. This expedition is shown on a relief in Hatshepsut's famous temple Deir el Bahari. 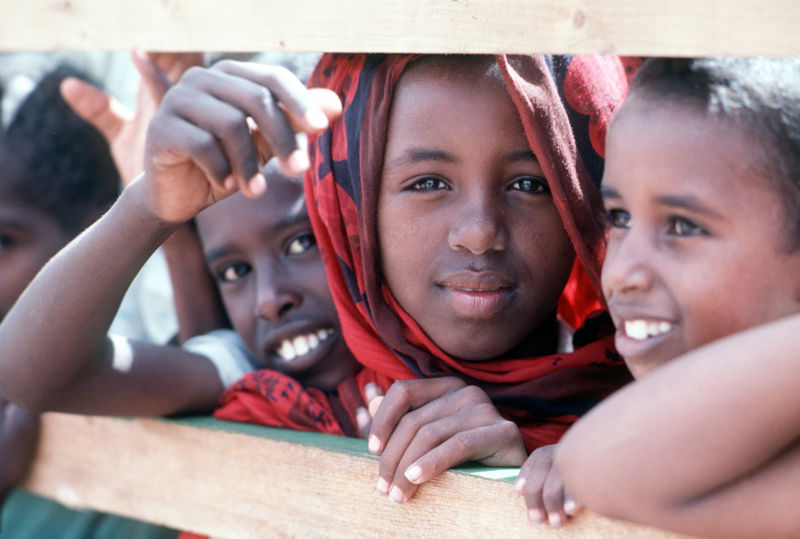 Somalia is in the headlines today because of the pirates. Most of them are former soldiers who now earn money by raiding ships. Due to the civil war, millions of people were on the run. Many of them still can’t survive without international help. A Somali government was elected in 2012. It promised peace, an economic up rise, and the rebuilding of schools and hospitals. Peace is slowly coming back to Somalia. There are still many bombed ruins to be seen. But every Friday, an Islamic holiday, the Somali visit the beaches. The children play soccer and the women wander along the coast.