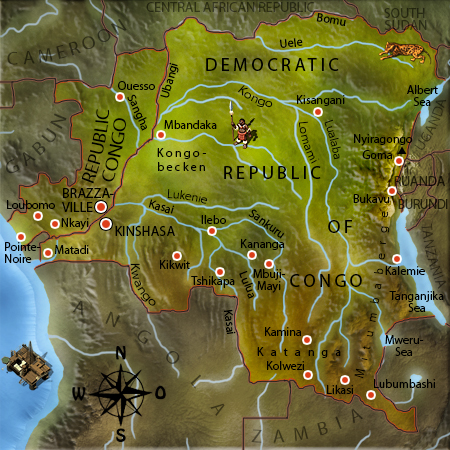 Mbote, welcome to the Democratic Republic of the Congo, in the heart of Africa!

The Democratic Republic of Congo lies in the heart of Africa. The country is named after the Congo River.

The Democratic Republic of Congo (DRC) - or the Congo- has a short coastal strip on the Atlantic and stretches like a large balloon into the interior of the continent. This is why many countries border it. On the map, the red points mark the largest cities in the country. In the north-west lies the smaller Republic of Congo. In the north, the Central African Republic and the Sudan border Congo. Angola and Zambia are in the south. The Rwenzori Mountains loom in the east. On the east side of the mountains the large African lakes are situated. They form a natural border to Tanzania, Burundi and Ruanda. The largest is the Tanganyika Lake. The country is characterized by the large rainforests which have grown around the Equatorial region. In the east lie untouched rainforests, in which new animal species are constantly being discovered. There are also high mountain ranges with volcanoes, some of which are still active. The beautiful bank of the Tanganyika Lake in the south-east reminds us of the French riviera. It is very hot and humid, due to the proximity to the Equator. There aren't 4 seasons, like there are here - there is only a change between rainy and dry season.

The majority of Congolese merchants travel on the river. They live and work of the Congo river and sell products which they get from fishermen from the river or hunters from the forests. Their boats are swimming grocery stores, in which fish, manioc, smoked ape meat or sweet potatoes are offered. Many huts in the villages on the river are built on stilts. Most Congolese travel in dugout canoes when the make a shopping tour or visit friends or family. The boats are called dugout canoes, because they are dug out of trees. Small children also travel on the river and are very adept at steering the small boats. With many hydroelectric power plants, the Congo is not only an important highway, but also an important energy provider.

The Congo - a swimming Market Place

The majority of Congolese merchants travel on the river. They live and work of the Congo river and sell products which they get from fishermen from the river or hunters from the forests. Their boats are swimming grocery stores, in which fish, manioc, smoked ape meat or sweet potatoes are offered. Many huts in the villages on the river are built on stilts. Most Congolese travel in dugout canoes when the make a shopping tour or visit friends or family. The boats are called dugout canoes, because they are dug out of trees. Small children also travel on the river and are very adept at steering the small boats. With many hydroelectric power plants, the Congo is not only an important highway, but also an important energy provider.

The Congo Basin is the second largest Rainforest on Earth

The Congo Basin stretches between the Rwenzori Mountains and the Atlantic. Only the Amazon Basin is larger. The Congo Basin contributes largely to the green lungs which span the earth along the equator. At times, the Congo Basin is flooded with currents and tributaries and the region can no longer be travelled through. The tropical rainforest is surrounded by savannahs. The Rwenzori Mountains were labelled as 'moon mountains' by the first Greek travellers who explored Africa, as the magnificent landscape seemed like a fantasy world with its exotic plants and rare animals. Today still the mountains, which are almost always covered in mist, amaze travellers. The mountain range forms the border to the countries to the east of Congo. The largest peak in the Rwenzori Mountains is the Pic Marguerite, which is over 5000m high. It is marked by a small triangle on the map above. Gorillas and rare okapis live in the mountain range.

Kinshasha- the Capital of Congo

Kinshasha lies on the Pool Malebo, a reservoir which forms the Congo. Kinshasha was established as a trading post in the 19th century by the African researcher Henry Morton Stanley. He named the area  Léopoldville, in honour of the then King Leopold of Belgium. The King of the small European country ruled over the large Congo region. Today, Kinshasha is the second largest city of the continent with nearly nine and a half million inhabitants. The city core is colonial European, as seen in the photo on the right. On the edges of the city, typical African satellite cities have developed. In the ethnological museum of the University you can make a trip through the history of central Africa. Points of interest include the fishing harbour Kinkole and the gardens of the presidential residence Nsele. Here you can swim and fish in the large water reservoir. Craftspeople present their wooden sculptures and jewellery in the market places of the capital city. Amazing works of native art can be seen in the National Museum. The population consists of different Bantu folk groups, such as the Luba, Congo, Rwanda or the Tutsi. 400 different languages are spoken in Congo, more than in any other African country! The official language is French. Lingala and Kiswahili are two of the most-spoken languages. The Democratic Republic of Congo is a 'young' country, when considering the age of its inhabitants. Almost half are younger than 14. This is due to the wars in the country, which has cost many lives. The majority of the Congolese are Christians and call themselves members of the Church of Christ in Congo. For this reason, many churches decorated with large crosses are found. Christiantiy in Congo is a result of colonisation more than 500 years ago. Despite the proselytisation, many Congolese still cultivate their old religion. In the east of the country, Islam is finding more and more devotees. Two thirds of the population live off the land. More and more are migrating to the cities. Around 50 000 Pygmies, the oldest inhabitants of central Africa, live in the wilder regions.

More about the Pygmies

In the DRC, many children live on the streets instead of going to school. Due to the civil wars, many children were thrown out as their families could no longer feed them. These children have to make their own way. But even many children who still live at home cannot attend school, as school fees are just too expensive for their parents. School uniforms and books are also expensive. For this reason, many parents decide that only a few of their children should learn reading and writing. Almost always they are sending their boys to school, not their girs. So most of the illiterate people are girls.

More about schools in Africa.

Do magic like Harry Potter? Many children in Africa wish they could. Harry Potter is the most-read book in Africa. Several adult Congolese believe in wizards and witches. They even believe that some children can do magic. If they cannot find an explanation for any misfortune, they blame the 'witch child'. Almost always this concerns children who were abandoned. According to the children's aid organisation World Vision, thousands of children in Congo are forced to flee because of the civil wars. Rebels kidnap children and force them to fight for armed groups. Numerous children flee alone and make their way stealthily to the neighbouring countries of Rwanda and Uganda. There they seek protection in refugee camps as they are too young to survive on their own. Fertile farmland and large mineral and raw material reserves have made the DRC one of the richest countries in Africa. However, the people receive little of this wealth. More than half of the Congolese live off the land. They grow fruit, vegetables, coffee, cocoa, tea, rubber, cotton, rice and palm oil. Rubber and palm oil are export goods. Copper, cobalt, manganese, zinc, uranium, tin and diamonds are mined. However, civil wars and corruption prevent the valuable natural resources from being used for the well-being of all. Another problem is that transport facilities, streets and traffic aren't reliable, hindering swift production. Many western corporations profit from this. They buy cheap natural resources, process them and sell the finished product for a large profit.

Child Labour in the Congo

In most of the mines children work, as they are small and can move better than larger adults through the tight passageways below the earth. Parents are happy with the extra income and children are proud to be able to contribute to the household, but this prevents them from being able to finish school. No other country in Africa has so many different and rare animal species as the DRC does. Here animals of the rainforests and the savanna can be observed as well as rare species which have only survived here, such as the okapi. Protected areas have been established to preserve the diverse animal kingdom. The only orphanage in the world for the bonobo monkey lies just outside of Kinshasha. Since the orphanage was established, many hundreds of animals could be saved. Poachers catch bonobo as they earn a lot from the clever monkeys on the black market.

The History of Congo

The Pygmies are the oldest inhabitants of central Africa and the Congo. Still today they live in communities similar to the ones of the primeval times of earth. Bantu folks settled around 7000 years ago in the Congo Basin, according to evidence seen in old tools and simple pieces of pottery.  Unlike the Pygmies who moved through the forests, the Bantu settled. They could work iron and farm land. Around 100 BC, the Congo region was  over populated so that several clans broke off and spread towards the east and west. Around 1000 AD, the people in central Africa organised themselves in small communities. Many specialised in certain areas, such as tilth, fishing, tool production or copper mining. With the development of trade and the growing population, early kingdoms developed. The largest empire was possessed by the Mani Kongo, the rulers of Congo.

More about the Kingdom of Congo and the history of central Africa.

The DRC is one of the poorest countries in the world today, despite being the country richest in natural resources. The rich ground is becoming more and more of a curse for the people. Rebels, state, military and western corporations fight for the resources. Those who own the land become rich through the exploitation of mineral resources. The bereaved are the people of the Congo. The majority of the men are jobless. They don't earn enough to pay the traditional bride price, which is why many leave the country. Many families were also torn apart during the civil wars and have become impoverished. For this reason, the DRC has more children living on the streets than any other African country. The Congelese desperately need peace.

Click on the buttons and read fairy tales, watch videos or cook a traditional dish of the Congo