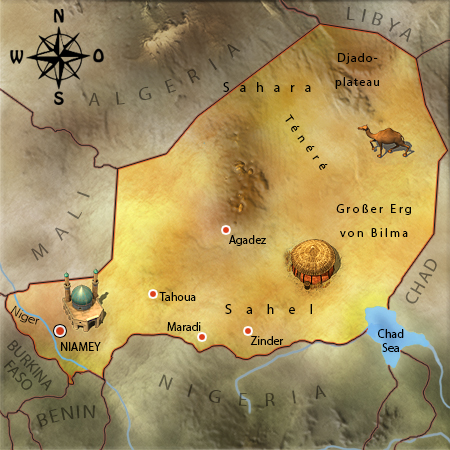 Marhaban, welcome to Niger, the desert country in the heart of North Africa!

The Republic of Niger is named after the Niger River. It is located in the centre of North Africa and builds a bridge between the Arabic world and Sub-Saharan Africa.

Niger is an inland country with many neighbours. It is surrounded by Algeria, Libya, Mali, Burkina Faso, Chad, Nigeria, and Benin. Some of these borders are so straight they could have been drawn with a ruler. This is because the borders were determined by the colonial powers. They determined these borders wihtout paying attention to the various peoples who lived there. They also ignored the fact that nomadic people had certain areas of migration, which did not correspond to country borders. In doing so they laid a foundation for territorial conflicts which remain unresolved today.

The Ténéré,  the most Beautiful Desert in the World 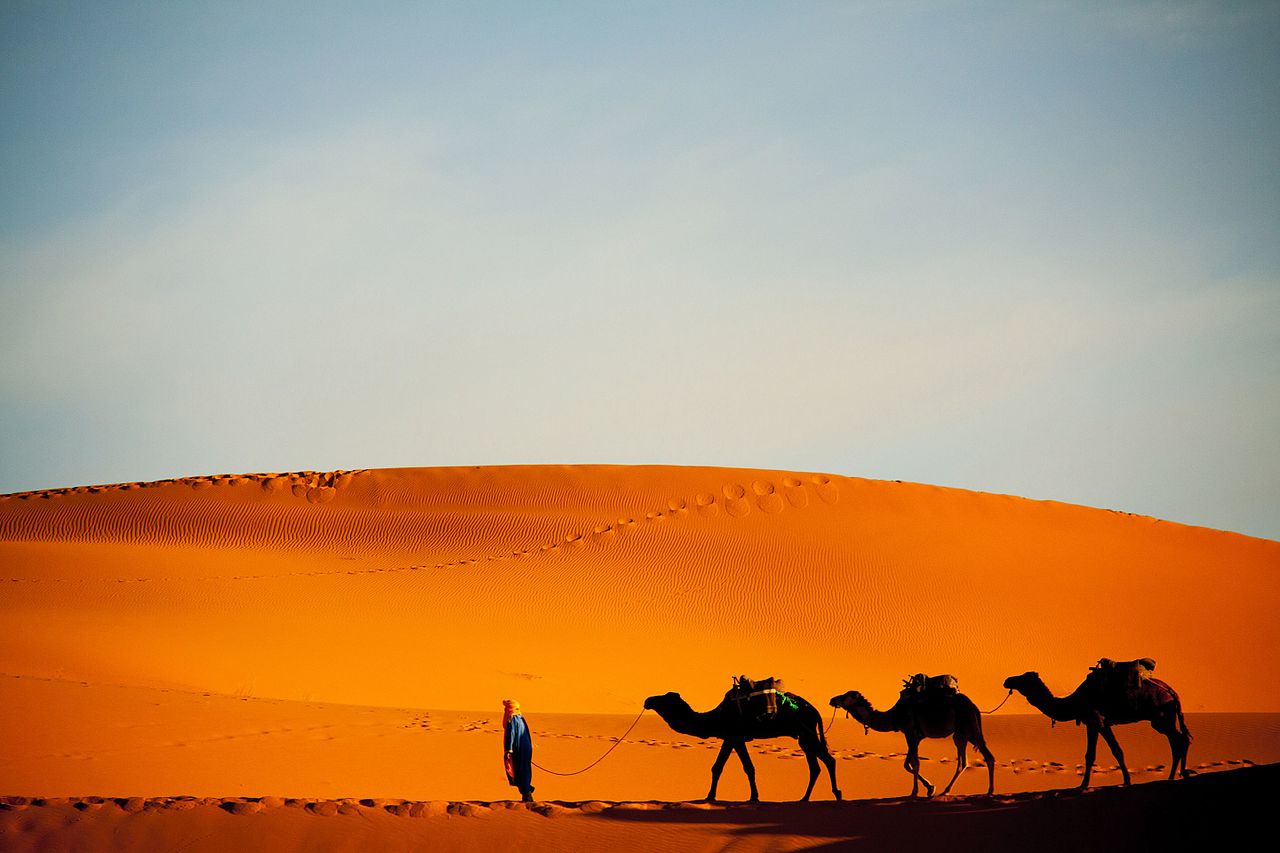 Niger lies on the southern edge of the Sahara desert meaning two thirds of the country is composed of desert land. The rest of the country also has a very dry climate because it is located between desert and the Sahel region. The Ténéré is considered the desert of all deserts. Its sand dunes stretching over kilometres and beautiful oases are some areas of the Sahara most worth seeing. Niger is a treasure trove for dinosaur fanatics: Here research scientists have found some of the oldest dinosaur fossils ever to be discovered. The Aïr Mountains are another stunning feature of Niger’s landscape. The mountain range reaches heights of around 2,000 metres and the ancient rock paintings discovered there have been named a UNESCO World Heritage site. More about the Sahara landscape. 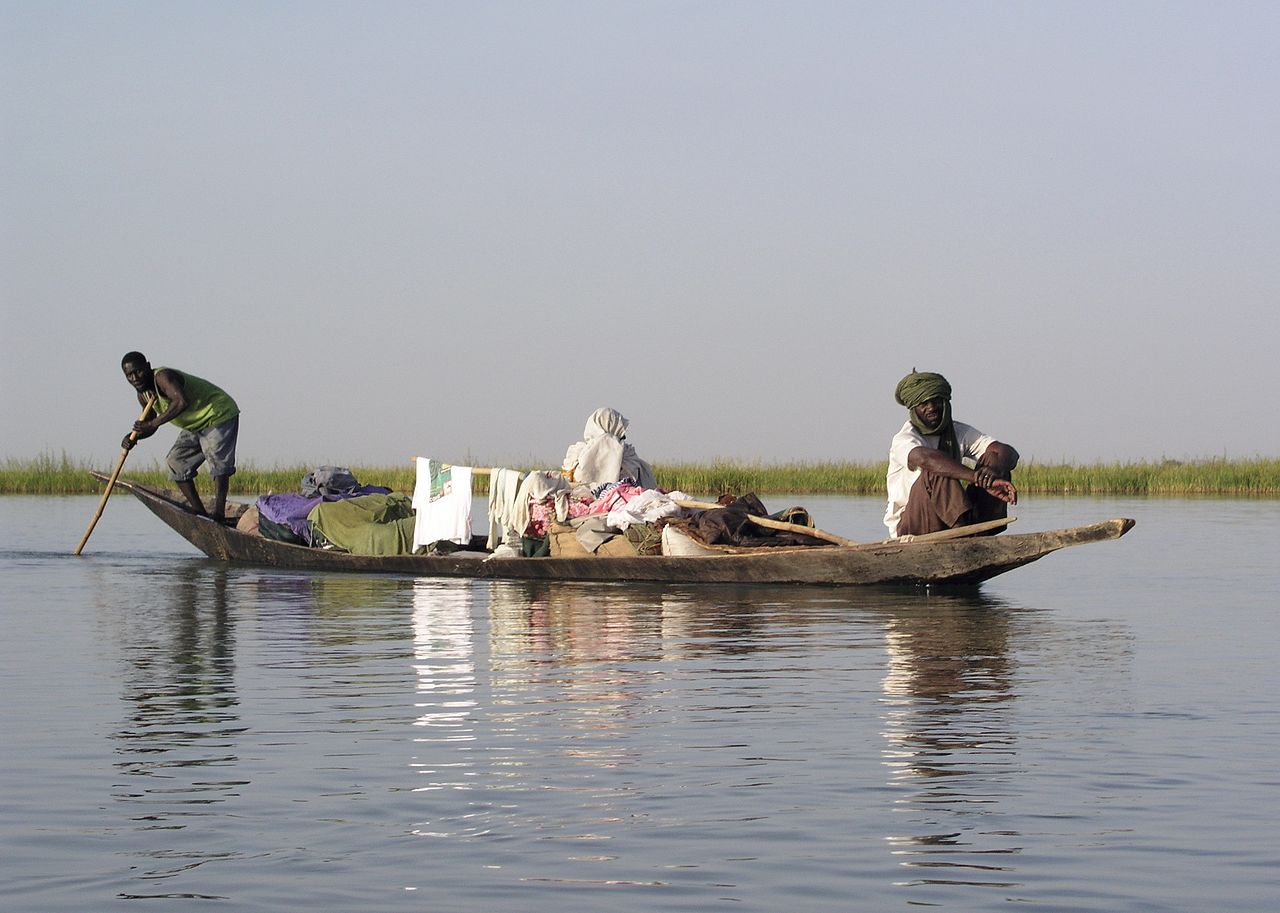 650 kilometres of the Niger flows through the southwest of the country and provides for a small area used for agriculture. This area makes up only 4% of Niger’s surface area but produces almost all vegetables and grain needed. Many picturesque villages along with Niger’s capital Niamey are located on the river. In the southeast on the border to Chad we find Lake Chad. This lake is a tiny remnant of a much bigger inland sea, which once surrounded parts of the Ténéré. Today only desert remains. More about the Niger River.

Niamey, the Capital of Niger 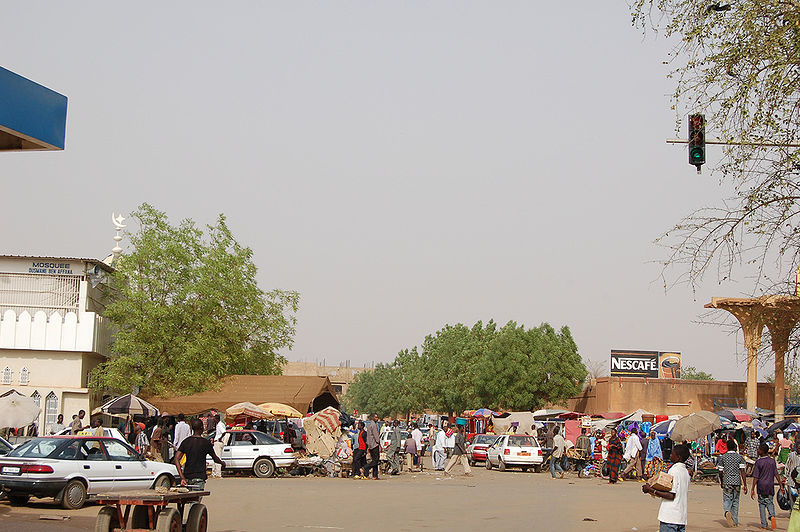 Niamey lies on the Niger River. The city used to be made up of small villages which ran along the banks of the river. In the 20th Century under French colonist rule these villages were joined together to form a city. With over a million inhabitants Niamey is the most heavily populated city in Niger and since Nigerien independence it has been the official capital. However the city still offers its visitors a village atmosphere, scattered with colourful markets where alongside fruit and vegetables you can buy pottery, clothing and mobile phones!

Agadez, the Centre of the Trans Sahara Trade 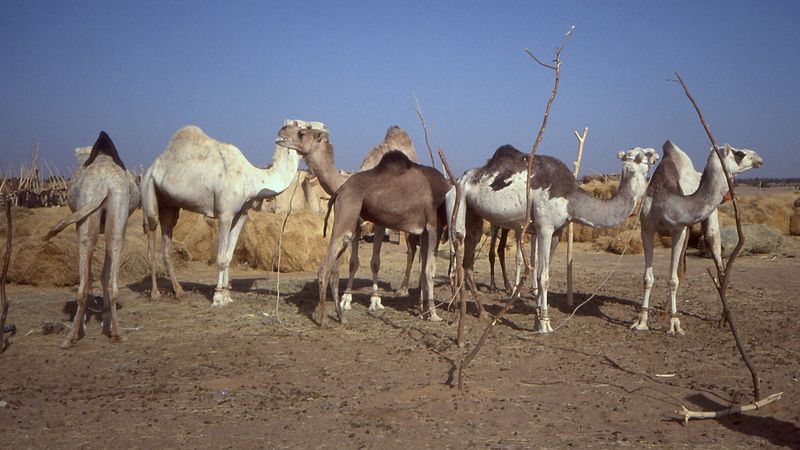 Significantly older than Niamey is the city of Agadez, which used to be an important centre for the Trans-Sahara trade. The city was originally founded by Berber tribes in the 15th Century. Agadez is situated in the middle of the Sahara and was capital of the Sultanate of Aïr, which still exists today. The buildings are all built from mud clay because there is no access to wood or bricks. 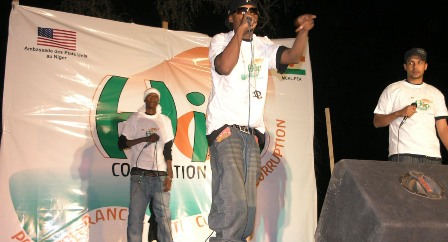 The Agadez mosque is famous for its impressively tall minaret which rises 27 metres up into the sky. For a building made of clay the height of this feature is a real miracle. Every year the tower has to be repaired. The minaret can be seen many kilometres away and is an important point of orientation for camel trains. Today more than 100,000 people live in Agadez. November is a busy time for the city as this is when the salt caravans arrive from Bilma and markets more lively than ever. At the beginning of the first month of the Islamic calendar (known as Muharram) the ten-day Bianou festival is celebrated by the Tuareg people. Street processions and dancing is accompanied by the sound of the Tobol drums. 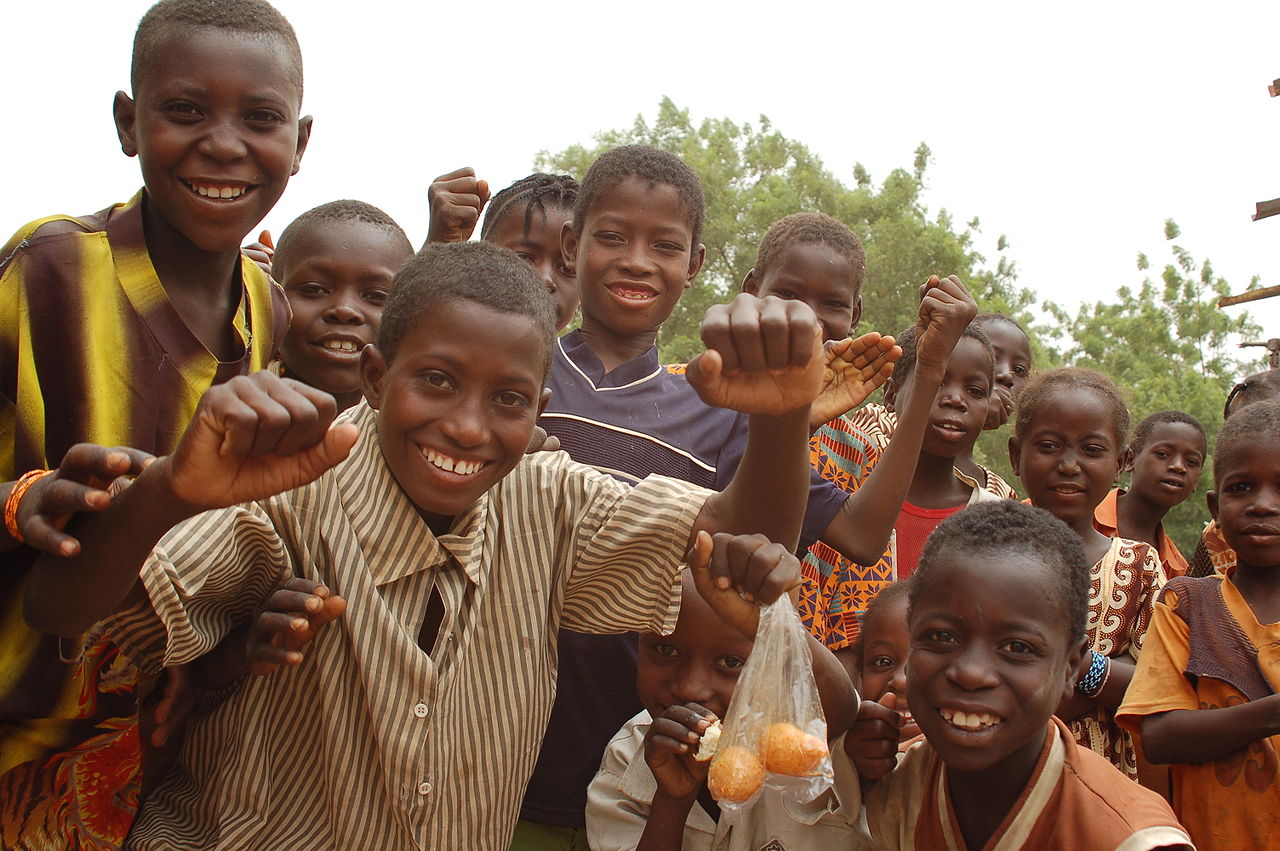 Today almost all Nigeriens are Muslim, although the majority still maintains the african traditional religion. The influence of Islam is becoming more apparent in Niger and neighbouring states Mali and Nigeria, but it is still unusual to see women in full Muslim dress. The official language is French, accompanied by the Hausa language which is the most widespread language in west Africa. The Nigerien population is composed of many traditional ethnic groups. Around half of the population belong to the Hausa people and a quarter are Songhai, arable farmers living west of the Niger River. The other quarter of the population belong to the Fulani whose main activity is cattle breeding. A million people belong to the Tuareg who also breed livestock and camels. They operate salt trade routes between Bilma and Agadez. The most unusual ethnic group is the Wodaabe, a small subgroup of the Fulani people who trek across the Sahel with their cattle herds. Their name means “Bird of the Wildernis” and they enjoy a degree of freedom hardly imaginable in other parts of the world today. More about the Wodaabe.

The Schools in Niger 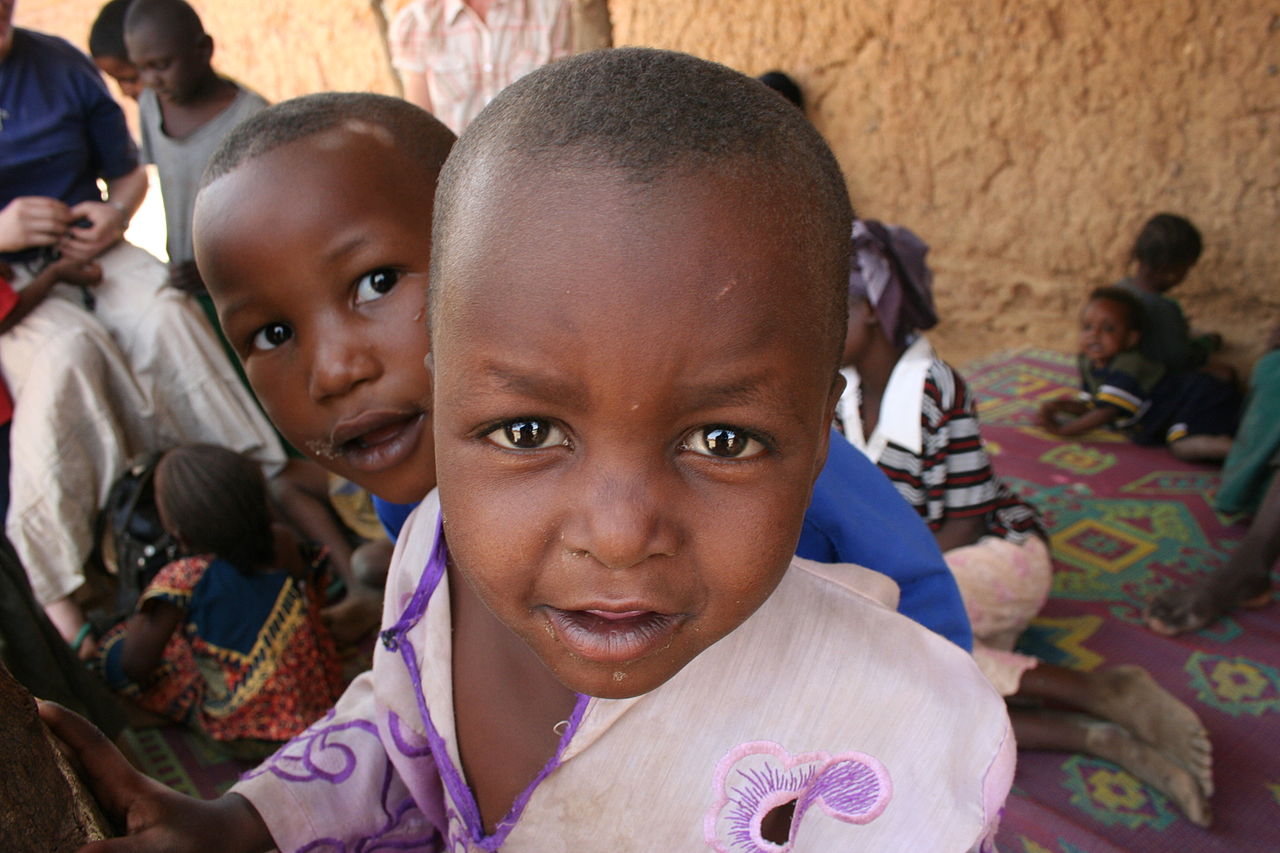 In Niger schooling is compulsory for ten years. There are no school fees but books, notepads and pens have to be paid for by the family. For many families that have an average income of 200€ a year these materials are a huge expense. On average a school class contains around 60 children and, as a result, organised lessons often fall by the wayside. The education system is part of the colonial legacy. It was modelled on the French school system whilst little consideration was given to the realities of Niger’s population. No wonder many parents choose to keep their children at home rather than attending school. But this is no solution given that 85% of men and 90% of women are unable to read or write. Along with the state schools there are approximately 50,000 Koran schools were Arabic is taught. 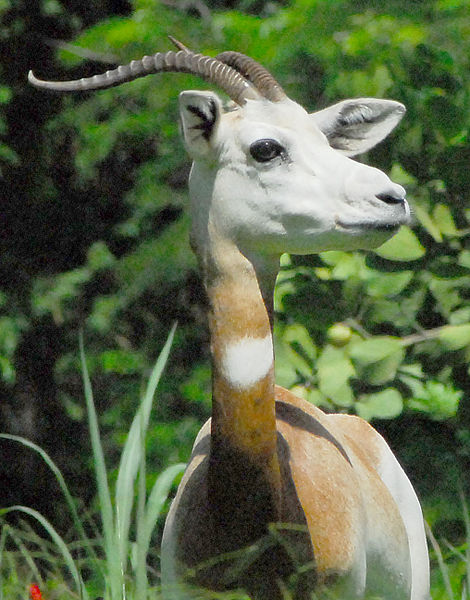 In Niger many animals can be found in the desert and the Sahel region, including different breeds of antelope, desert cheetahs, snakes, hyenas and vultures. The Niger River is home to hippos, crocodiles, snakes and many different types of bird. The Dama gazelle is Niger’s symbolic animal which is featured on the emblem of the Nigerien football team. 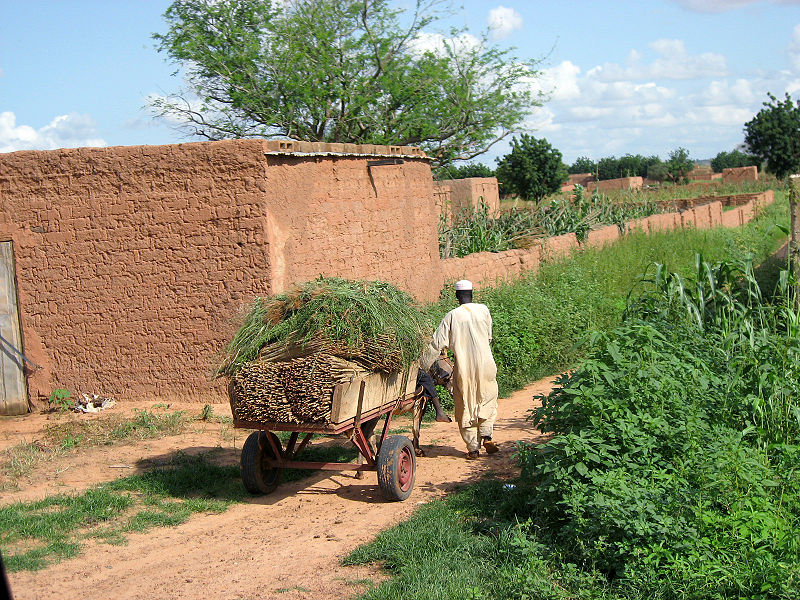 Almost all Nigerians live from agriculture even though only 4% of the land can be cultivated. Alongside fishing from the Niger River and Lake Chad, keeping livestock is one of the most important sources of income. But what is Niger’s most lucrative source of income? Uranium! Niger is one of the most important producers of uranium worldwide. When uranium was discovered in 1965 a manmade town was erected on the border of the Aïr Mountains called Arlit. This uranium town was built exclusively using building materials from France which had to be transported overseas and across the African continent. Even today uranium is produced by a French company in this region. Uranium production requires a lot of water which is in short supply to those living in the dry areas around Arlit. People living in surrounding areas are not protected from the radiation which is released as the uranium is produced. Therefore there is a lot of tension between the government and the Tuareg people.

The History of Niger

Niger’s history reaches back over millennia. Around 10,000 to 4,000 years ago BC the Sahara was still fertile. This period in history is called the Neolithic era which was characterised by the raising and transportation of cattle and livestock. We know this not only because of rock paintings found at the Aïr Mountains but also from discoveries of stone tools and pottery along the banks of former lakes and rivers. In Africa today, Niger no longer seems to play such a significant role. But in the middle ages this was very different. Its prominent position between the Niger Arc and Lake Chad soon awakened interest from larger empires in the north, west and east of the continent. 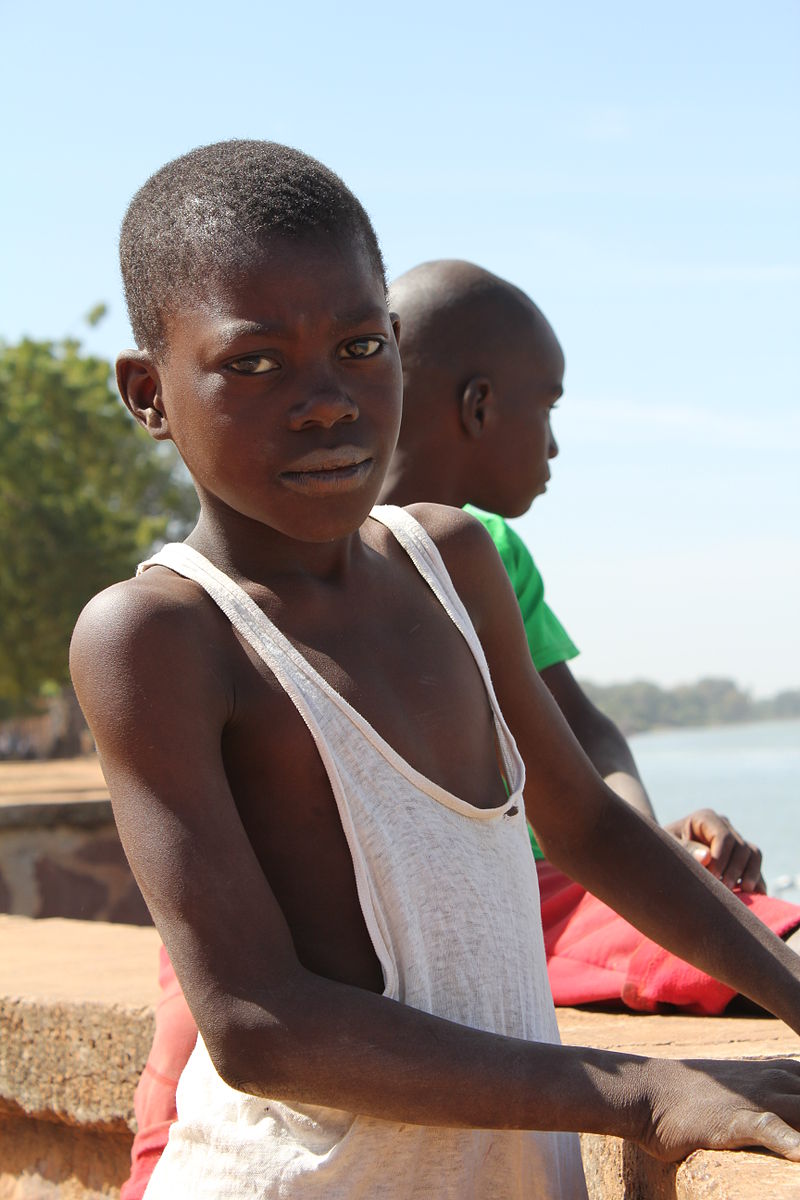 This former French colony has been independent since 1960. There have been a number of political changes. In the final years of the French colonisation a one party political system was installed. It allowed Nigerian rulers to operate authoritarian. The ruling elite became rich whilst the population was oppressed. Particular conflicts have arisen between Nigerian politicians and the Tuareg people because of the reckless exploitation of their land, which is situated in the uranium production zone. There were some attempts to put an end to the actions of the leading politicians but the situation never really improved. It remains unknown as to when the political situation in Niger is likely to stabilise. This causes huge problems for the Nigerians as they are left to deal with recurring drought and famine without any help from the government. Niger is classed as one of the least developed countries in the world.