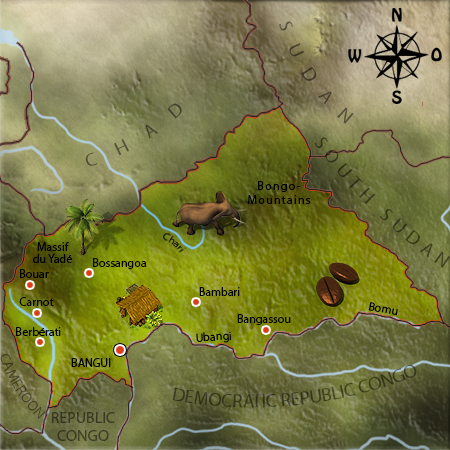 Bonjour, welcome to the Central African  Republic, the heart of Africa!

Once the country was covered with dense rainforests. The pygmies live here for thousands of years. They have protected some of the rainforests, that is why you can find even today one of the world's most amazing wildlife in the Central African Republic. The landscape of Central Africa is varied. The north is dry and almost uninhabited. It only rains in April and August. The south is covered in rainforest and it can rain steadily for nine months. A savanna covers the area between north and south. The Congo River forms a natural boundary to the Congo and the Republic of Congo. The majority of the Central Africans live on the river banks in the south. The Yade Massif forms a natural boundary to Cameroon in the west.

Bangui lies on the southern boundary to the DRC. Over 600 000 people live in Bangui. The city is distinguished by wide avenue-like streets. In the centre of the city is the Place de Republique, which was decorated with a Roman-style triumphal arch. The former Emperor Bokasse had it built. Something else worth seeing is the market in Bangui. Traders of all kinds sell everything there is to sell. The stalls aren’t organised in a specific way, so they stand jumbled up among each other. Foreigners find it very difficult to navigate their way through the large variety of things on offer. When the market is open, all weapons become silent- there is often political turmoil in the country. Other things to see are the Boganda-Museum and the Centre Artisanal, in which native art pieces can be admired. The original inhabitants of the Central African Republic were forest folk groups, also known as the Aka Pygmies. But many Pygmies no longer live here as they were displaced by migrating folk groups. Bantu folk groups live in the riverscapes of the south. Many still hold the old African beliefs of ancestors and the gods of creation. Due to proselytization, half the population are catholic, whereas the other half practise different beliefs. Islam is gaining more and more influence in the north-east of the country. The people speak the language of their people, the Sango. Other than Sango, French, the official language, has been spoken by the majority since being colonised by the French.

In the Central African Republic, school is compulsory. However, not all children go to school, as they have to help their parents in the fields. Most inhabitants live of agriculture. Girls only attend school for a few years. Classes are usually heavily crowded. Most children grow up speaking Sango, but in school they have to be able to understand  lessons in French, as it is the official language. This is very difficult and it is not surprising that half the pupils fail. The Central African Republic is rich in natural resources, but the majority of the inhabitants are poor. Most of them live form agriculture, although only a small part of land is allocated to them. Gold, iron and diamonds are mined. Children often work in the diamond mines. There are uranium deposits in the west. The forests provide all kinds of tropical woods. Textiles, schoes and wood are industrially processed, but not a lot of  money is made from the industry. Why do so many people live in poverty in a country so rich in natural resources? The industry is not very developed and streets and transportation routes aren’t accessible. This means that natural resources can’t be processed within the country and so are exported instead. The world market decides on the price and the profits reach the pockets of only a few. 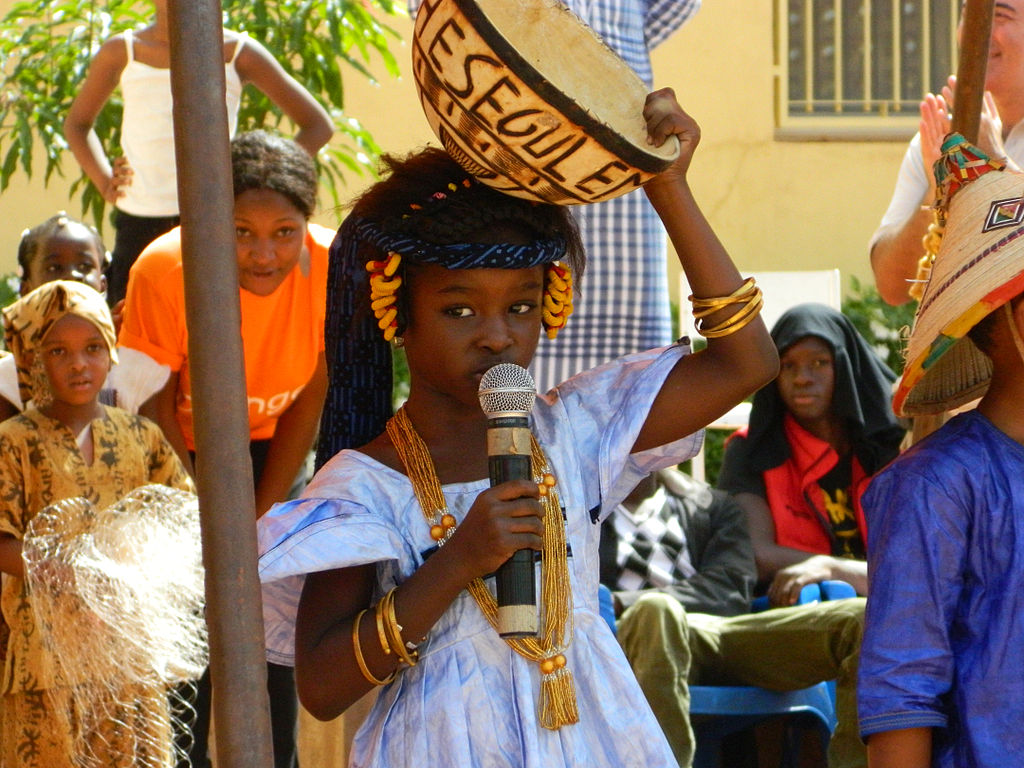 What do the people of the Central African Republic celebrate when peace reigns? Public holidays like those in Europe. This includes Easter and Christmas. Muslims celebrate Islamic holidays, such as Ramadan and the Feast of Sacrifice. Many also celebrate the old African ancestor celebrations, like these dancers who move through the streets of Bangui in a group, as according to old traditions.

Three countries have come together to form the huge Dzanga-Sangha nature reserve. The national park lies on the border between Cameroon, the Central African Republic and the Republic of Congo. The rarely-seen lowland gorillas and the wild elefants have withdrawn into the rainforests. Situtungas are especially comfortable in the marshes of the forests. The male and females have a similar appearance in their early years- when they grow up, the males grow a shaggy grey coat. Elefants, apes, antelope, buffalos, wildebeest and zebras can be seen in the savanna. Monitor lizards and hippos live in the waters. Rare birds breed on the river banks.

The pygmies have lived in the forests of Central Africa for thousands of years. They weren’t militant and lived from hunting and gathering. Even today they live according tot he rules and rituals of their ancestors. Around 1000 BC, the Iron Age began in Central Africa. The slave traders in Sudan started to hunt the people in the heart of the continent. They crossed the savannas and forests and carried off the natives. Bantu folk groups from the Congo area and the Azande form the north began to settle along the rivers of Central Africa. Around 1800, a war lord established a sultanate, the Rafai Empire, on the Mbomou River. Towards the end oft he 19th century,  another sultanate was established on the river, the Empire of Bang Assou. The first European missionaries and traders arrived in the empire in the heart of Africa. Their descendants changed the continent forever.

Due to continuous civil wars, travel to the country isn’t very popular. As a result, the Central African Republic may have found a path to democracy- through free elections, an independent government and a head of state voted in by the people. But is this enough for a democracy? The country is in debt, corruption is high and freedom of the press is limited. Military conflicts continuously unsettle the country. Christians fight against Muslims. It seems to be a religious battle, but it is actually about political power and control of the valuable natural resources. In rural areas, children are kidnapped and trained as fighters and the situation in the cities resemble that of a civil war. Is the end of the battle in sight? Only more education and a better democracy could install peace in the country. The continuous upheaval and civil wars have weakened the republic. The economy and education lie in ruins. Many children left school early to help out in the household and on the fields. Half of the population is illiterate and unemployment rates are high. Most families survive on around 1 Euro a day.