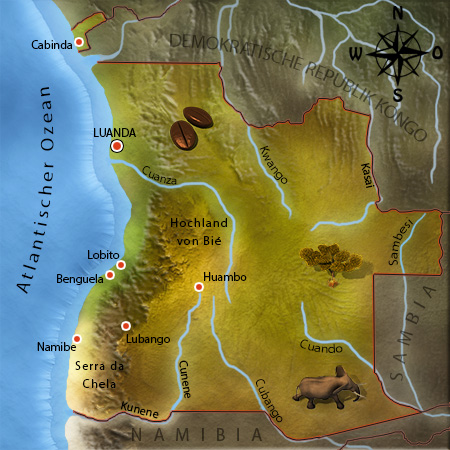 Bem-vindo a Angola! Welcome to Angola, the tropical country in southern Africa! 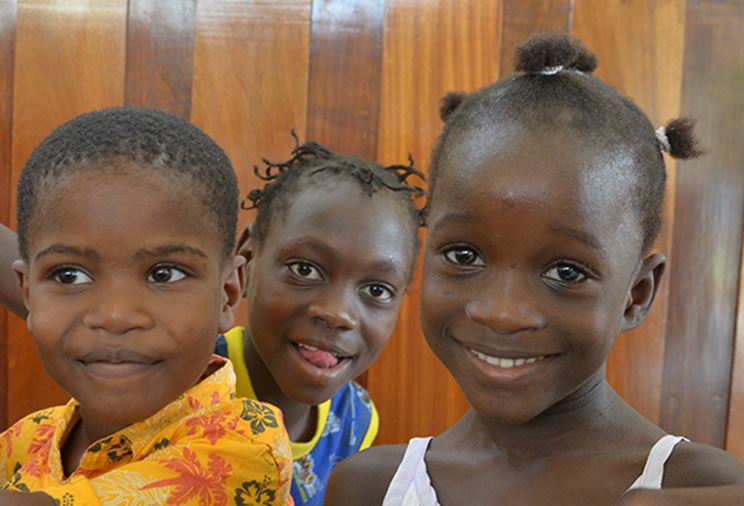 Angola is a huge country on the Atlantic. The coastal strip stretches in-between the outlets of the Congo river in the north and those of the Cunene in the south. Angola’s neighbors are the Democratic Republic of Congo, Namibia and Zambia.

For comparison: Angola is three times the size of Germany!

Angola is so big that you can find almost all types of African landscapes, forests, savannas, deserts and mountain ranges. You can even find different climate zones depending on where you are. The coast is very rocky. Beginning at the city Namibe there is a desert that stretches all the way to Namibia.

The midland consists of high plateaus with savannahs and rain forests. The highland of Bié makes up two thirds of Angola. West of the highlands, mountain chains arise with the highest mountain in Angola, the Morro de Moco with a height of 2 620 m. The Okavango begins its journey here, only that it is called Cubango here. On its 1700 km long journey it does not flow towards the Atlantic but towards the Kalahari desert. This is where all the water reaching the Okavango delta does not flow into a river or sea. It is ultimately evaporated in the swamps and canals of the delta.

Cabinda is a small area in Angola, which does not belong to Angola though. These types of areas are named enclaves. In the highlands a moderate tropical climate can be found. In the north and on the coast it gets very hot with tropical temperatures that reach between 15 and 30°C. The rainy season lasts from November to March. The Benguela flows alongside the coast and ensures fog on a regular basis.

Luanda – the Capital of Angola

Luanda is situated on the Atlantic Ocean. The natural bay here offers ideal conditions for a harbor, which is why the Portuguese constructed a stopover port here for their long journey to India. Even today the most important harbor of the country is in Luanda. The city is Angola’s center with more than 5 million inhabitants. This makes Angola’s capital one of the ten largest cities in Africa.

The old town of Luanda is located near the harbor where there are also countless old buildings that remind of the Portuguese colonizers. The narrow streets are filled with merchants and children that are selling drinks or are running errands. In the district named Benfica there is an artist’s market. The Museum of Ethnology is worth a visit – it is filled with African art and countless masks. You will learn important facts about Angola’s history here. Only a few minutes outside of Luanda is the market Roque Santeiro. On the weekends the market turns into a type of carnival. Dancers and musicians perform in traditional clothing and entertain the visitors. 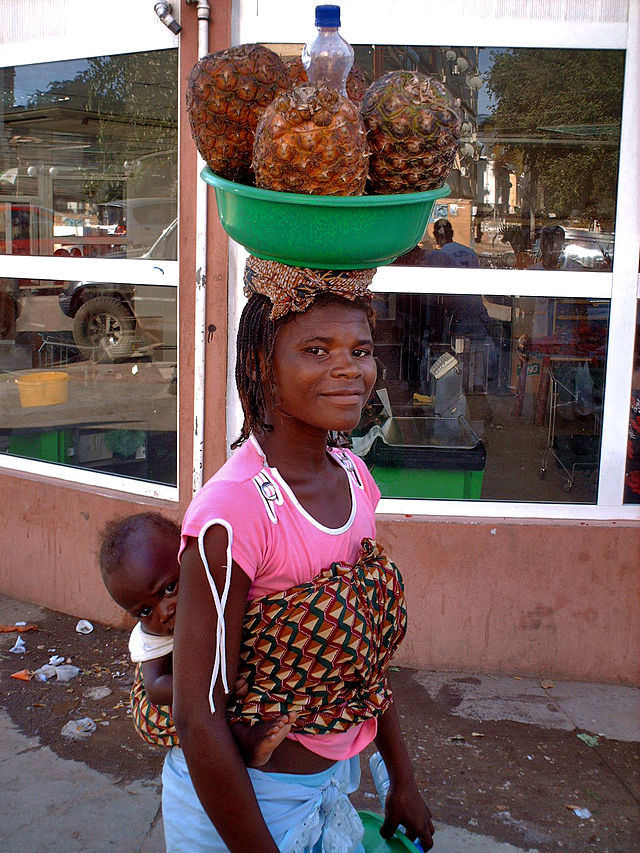 Many different peoples live in Angola – most with completely different rules and rituals. The largest group of peoples are the Kimbundu who live around the capital Luanda and the Ovimbundu in the central highlands. Single mothers have it the hardest here, especially in rural areas. Old rules and laws are still enforced in many communities, making it impossible  for them to own land and to plant fruit or vegetables on this land. The Chokwe have settled in the northern area of the country. They introduce their children with ritual scarification into adulthood. They boys learn how to carve wooden masks and how to perform dances with the masks on. Today the meaning behind these old rituals is hard to understand but in former times there certainly was a good reason behind these rituals. 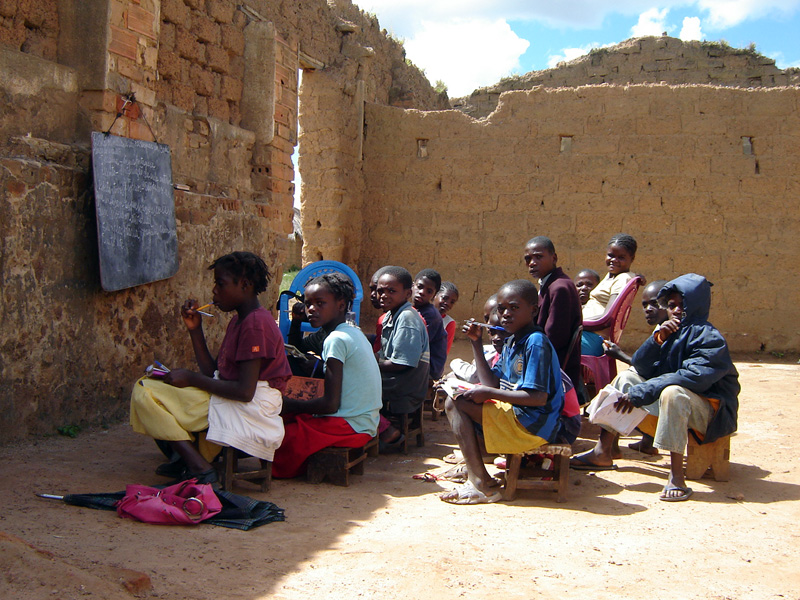 Elementary schools are promoted and very important in Angola. Some decades ago, during the civil war many schools were destroyed. Today, almost all children visit elementary schools though. In public schools the children have to wear school-uniforms. Class takes place in Portuguese, the official language of the country. The curriculum in the schools here is very similar to that of western schools. In the countryside the schools often do not have enough classrooms and teaching materials. Nevertheless, Angolans are well-educated. Almost all grown-ups speak two languages, their own and Portuguese. This is very impressive since one third of them can neither read nor write. Unfortunately, girls and women are still disadvantaged when it comes to education. 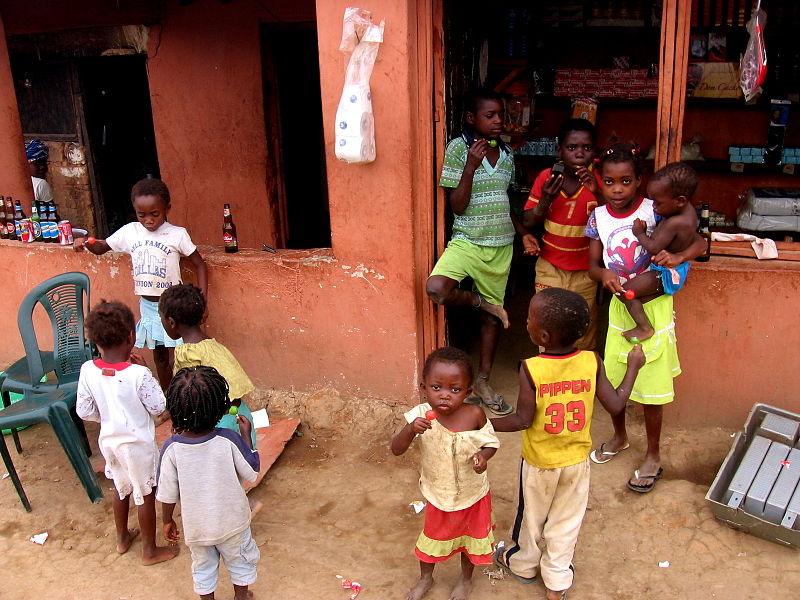 Many children in Angola work to help provide for their families. They don't have much time to play. This doesn’t stop them from enjoying their free time though. They often just hang out together. The older children look out for the younger ones and take them to meet their friends. They like to sing and dance or do sports. The boys usually play soccer while the girls play netball. Nganke is a marble game that many girls in Angola play. Instead of using marbles they often use pearls. The game needs at least two players, it is more fun with more players though. You need to dig a small hole and draw a line from which to throw. Then all players have to let a marble role towards the ditch. Whoever hits the ditch is allowed to keep all marbles that do not make it into the ditch. If two or more players make it into the ditch, though, there is a type of finals between the last remaining players. They have to then roll a marble towards the ditch again until there is only one winner.

Angola is a wealthy country. Despite the rich natural resources, most of the population earns very little. Most work in agriculture where the wages are very low. Many live off of fishing as well. Not only the coasts are rich in fish, the rivers are as well. The more Angola recovers from the civil war, the more important the earnings from tourism become. Especially the coasts of the island Massula are a sought after vacation location.

Goods that are exported include diamonds, gold, oil and coffee. There are large oil-reserves in the north and off the coast of Angola. Oil is extracted from deep-sea drilling stations here. Unfortunately, accidents occur quite often which leads to large amounts of oil being spilled into the ocean. This is a big threat to animals living in the depths of the ocean. 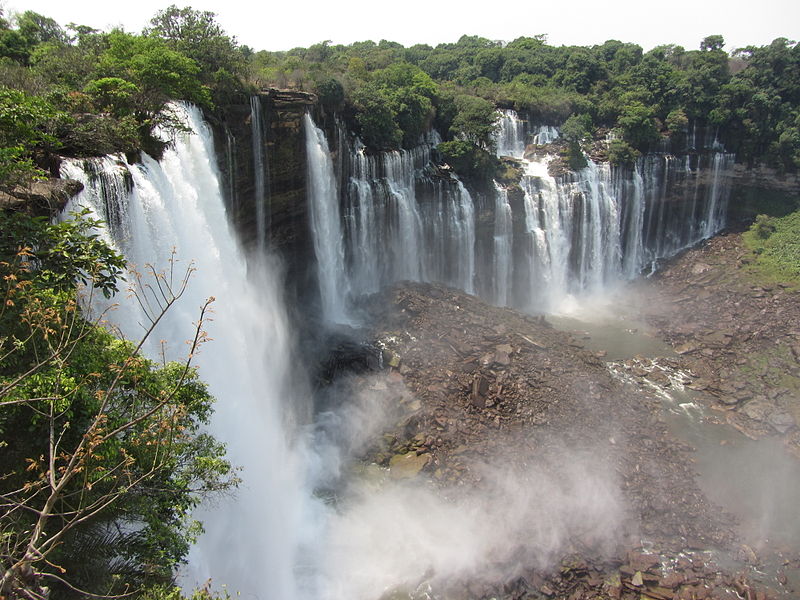 The waterfalls of Kalandula are the third highest in all of Africa. They are formed by a conflux of the Cuanza and are surrounded by one of the most magnificent and exotic wildlife habitats. On the island of Massula you will be able to find the prettiest beach in all of Angola, at least the natives say so. You can reach this island with simple boats. Many Africans spend their vacations there but more and more Europeans are discovering Massula as well. This is why many fishermen earn some extra money with the tourists also; they transport them to the island on their small fishing boats. 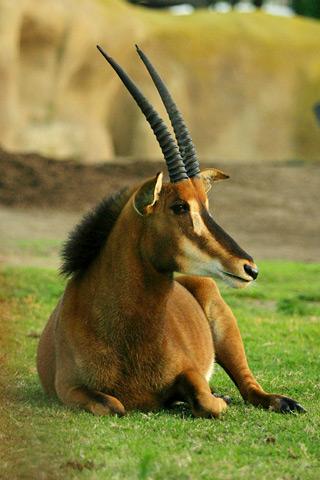 Due to its various landscapes the animal kingdom in Angola is extremely diverse. Large savannah animals like hippos, rhinos and elephants have become rare though. Antelopes, Angola giraffes, zebras and all kinds of predatory mammals can be found frequently. Large hordes of baboons roam the dry savannahs in the north. Honey badgers, warthogs and porcupines live in the steppes. Honey badgers enjoy eating the sweet honeycombs made by bees. His thick fur protects him from their stings but his sensitive nose has to deal with quite a few. The bees won’t let themselves get robbed without a fight. One animal can only be found in Angola, the Sable antelope, which is shown on the picture to the right. It is large, black and has horns that bend backwards. His horns can reach lengths of up to 1,70 m, which makes him an excellent digger. He is depicted on Angolan banknotes and stamps.

More on animals in the southern savannas 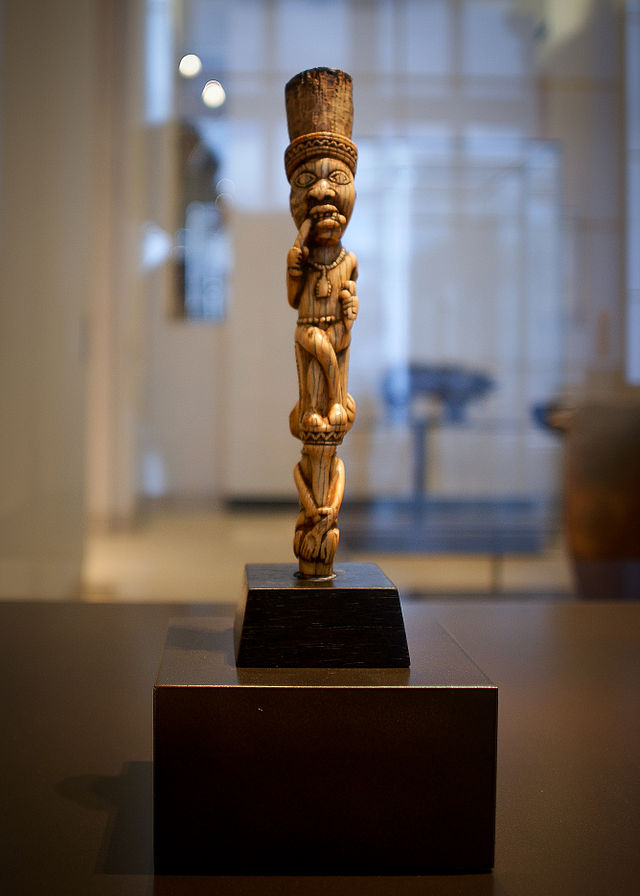 The oldest inhabitants of Angola are probably bushmen. Bantus from the Congo Basin later migrated and drove out the bushmen into the dry savannahs. The Bantu settled on the fertile grounds in the highlands and on the coasts. The founded towns and cities and came to wealth. In the shadow of the Congo Kingdom they built a kingdom of their own, the Kingdom of Ndongo. They built large armies but always stayed a vassal state of the Congo Kingdom. Their empire endured all the way into the 17th century. Today’s name – Angola – came from the former kings, the Ngola. When Portuguese seafarers arrived on the coast of Angola in the 16th century they named the area A-Ngola, the land of the Ngola kings. On the picture to the left you can see a figurine of the Yombe.

Since 2002 Angola is a republic and is ruled by a state president. The constitution grants the president much power. This has, unfortunately, led to the government acting mainly in its own interest and not in that of the people. The wealth of the natural resources never makes it to the regular population. 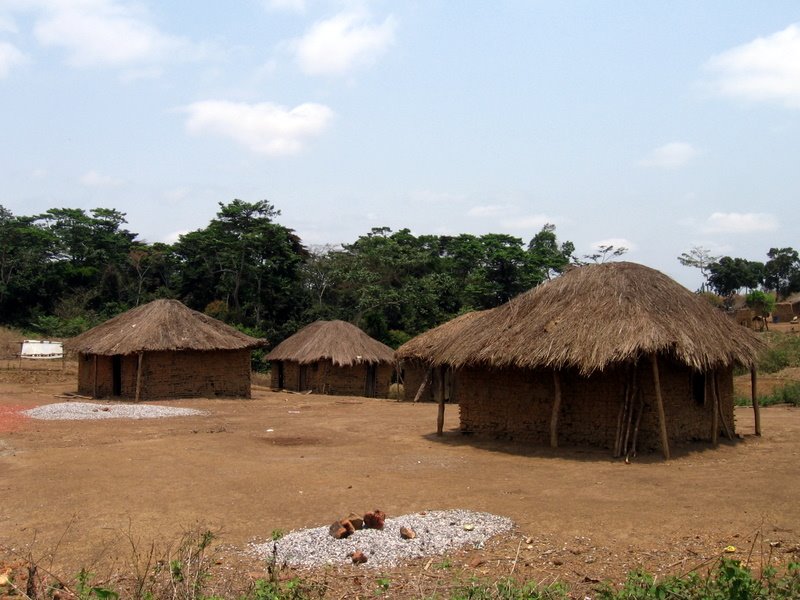 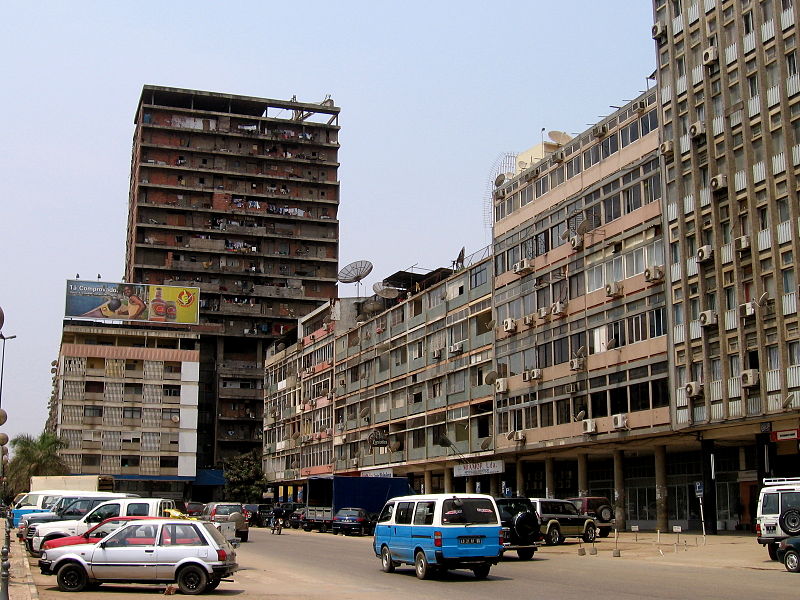 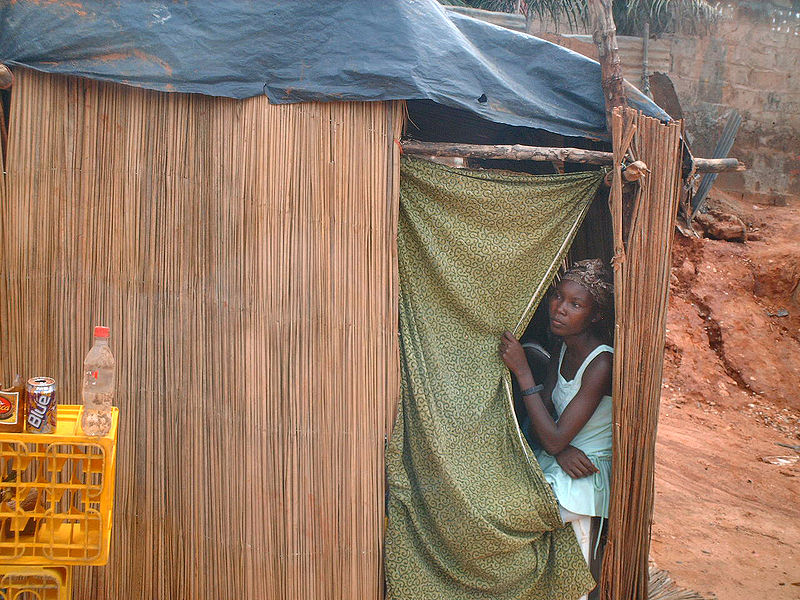 Cities and towns have to be rebuilt. The country is rich enough to provide new schools and hospitals. But the majority lives in poverty though. There is no medical help for young children and mothers in the slums. There aren’t enough schools, school books or medication. Even access to clean water is low. It is especially hard for the Bushmen. They are not included in the political decisions that are made. Their life-style is not accepted and they are driven away from their hunting grounds.