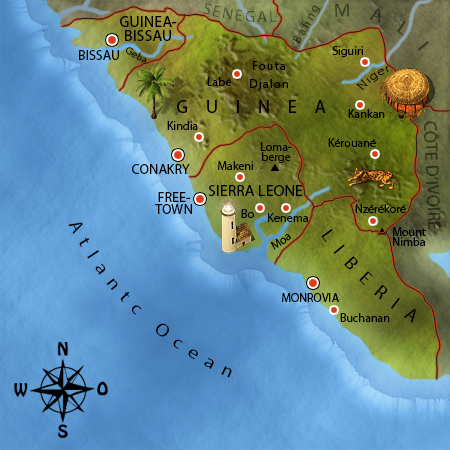 Olá, welcome to Guinea-Bissau, the green country on the western coast of Africa !

Guinea-Bissau consists of a mainland and a group of islands in the Atlantic Ocean.

The mainland shares its northern border with Senegal and its eastern and southern border with Guinea. The country is north of the Equator. The climate is tropical with temperatures around 30° Celsius. So it’s pretty hot here. There aren’t four seasons here, only a rainy and a dry season. The dry season begins in December and ends in the middle of May. Everybody is happy when the first rain begins in June.

For comparison: Guinea-Bissau is about the same size as Switzerland.

Guinea-Bissau is a “green” country, because more than a third of its area is covered by tropical rainforests. Even the coast is already lined with rainforest. Once you get further into the mainland, savannah landscapes begin to take over. The Bissagos Islands are a group of islands off the coast of Guinea-Bissau. Only half of the 88 islands are inhabited. This is where the Bijago live. Boats cannot disembark on the smaller islands. This is why unrivaled nature can still be found here. Rare animals and plants have survived here like the scarce ocean turtle.

Bissau, the Capital of Guinea-Bissau

Bissau is a port on the coast of the Atlantic Ocean, on the Geba river. It is the center of the country. From its large harbor you can take the ferry to visit the Bijagós archipelago. Bissau only has around 400 000 inhabitants and is one of the smallest capitals of the continent. Life in the city is quite quiet. You can stroll across the markets and buy exotic fruit and vegetables or try local dishes at one of the countless street kitchens. All hell breaks loose in this quiet city in February though. The famous carnival takes place then with music, colorful masquerades and large parades. Unfortunately, many of the attractions in Bissau were destroyed during the civil war in 1998/1999. Even today the roof of the presidential palest is still in ruins. 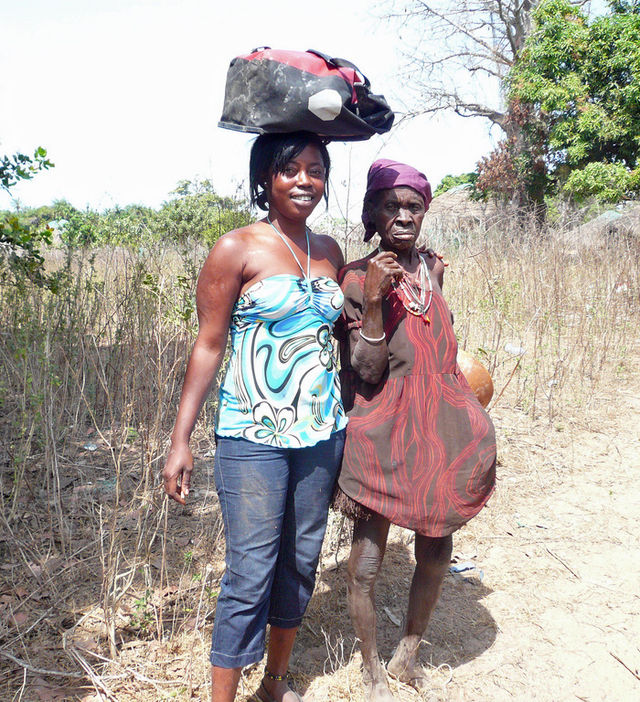 The largest group in Guinea-Bissau are the Balanta. The official language in Guinea-Bissau is Portuguese. Most speak Kreol though, a mix of Portuguese and African languages. The Fula, Mandinka or Bijago speak their own languages. Most of the inhabitants of Guinea-Bissau tend to their traditional African beliefs. The belief that their ancestors influence their lives is one of them. This is why most households have shrines in which sacrificial offerings are made on a regular basis. Most villages have public shrines for the  gods of their village. About a third of the inhabitants are Muslims. The inhabitants are relaxed about their religion. This is why they are not so strict about religious manners as in other West African countries. The men in Guinea-Bissau call the shots, they are often married to several women. This is why children grow up with many siblings. 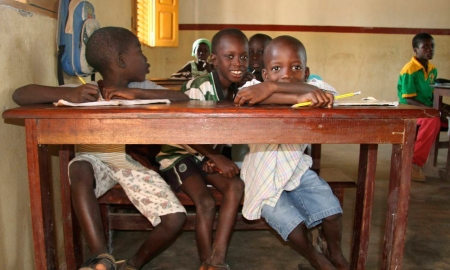 In Guinea-Bissau many parents do not have enough money to buy toys for their children to play with. Therefore, the children just handcraft toys for themselves. They use stones, pits of fruit or sand to make their own boards for games. They play a type of Nine Men’s Morris. They make cars using wire, cans or old pans. They bend the wire into wheels and attach them to a can. And finished is the car. They use old socks and sand to make juggling balls. Clay and corn cobs are used to make puppets. 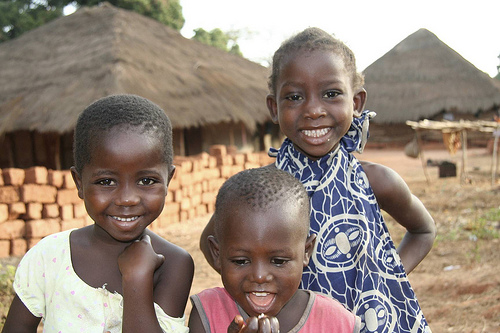 In the poorer countries like Guinea-Bissau many parents do not have enough money to buy toys for their children to play with. Therefore, the children just handcraft toys for themselves. They use stones, pits of fruit or sand to make their own boards for games. They play a type of Nine Men’s Morris or an African bean game on these. They make toy cars using wire, cans or old pans. They bend the wire into wheels and attach them to a can. And finished is the toy car. They use old socks and sand to make juggling balls. Clay and corn cobs are used to make puppets. There are no borders to their fantasy. 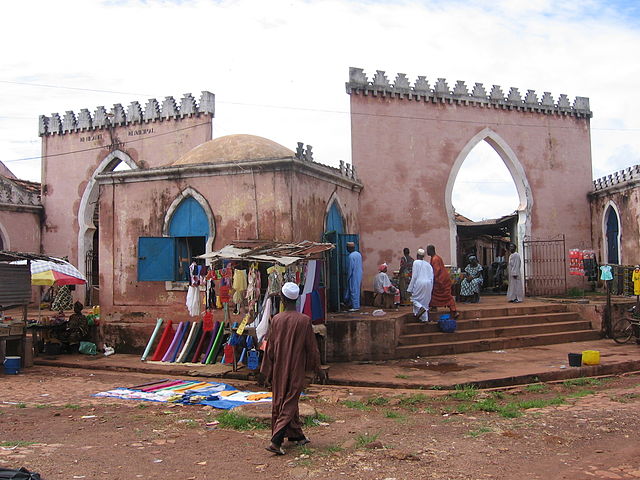 When it comes to attractions, Guinea-Bissau has not have much to offer. But the nature and animal kingdom are truly unique. The Bissagós Archipelago with its enchanting islands is a paradise for divers. You can see hippos and crocodiles bathing in the saltwater in the Orango Island National Park. The grave sites for the Bijagó kings are in the national park as well. The graves tell us many things about the history of the island peoples, where women had the say. They were the head of the family and chose the men they wanted to marry. What a difference to the families in Guinea-Bissau today! 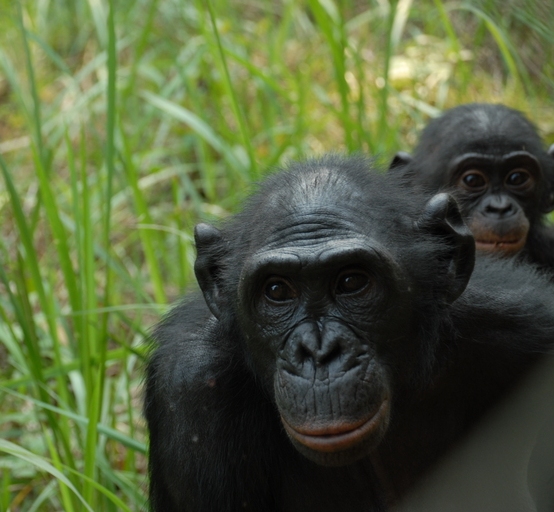 You can find many migratory birds from your home in the Cufada Lagoon, since they spend the winters here. Rare and exotic birds also nest in-between hippos and crocodiles without being bothered here. The tropical rainforests in the south of Guinea-Bissau are home to some of the rarest animals of Africa. There are black and red wild boars, colorful iridescent bird species and countless snakes, toads, lizards and insects. Chimpanzees, who have become quite rare, have been settled here and are the bosses of the jungle now.

More on the animals in the rainforests 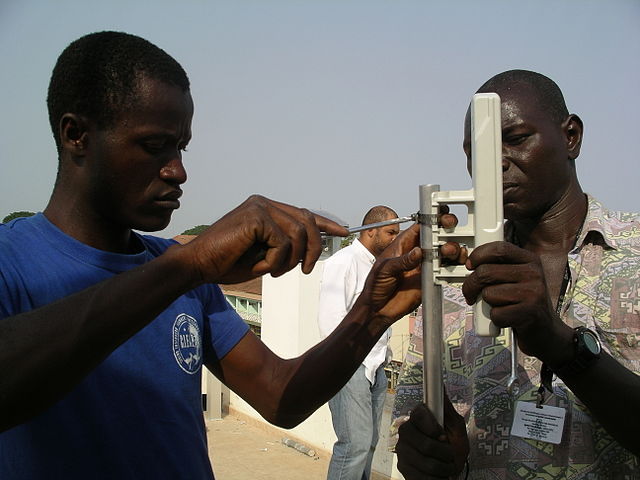 The majority of the population lives off of agriculture and fishing. They cultivate rice, corn,  millet, cassava, yams and sugar cane. The country has reserves of phosphate, oil and gold. Large bauxite deposits have been found on the border to Guinea. Bauxite is used to make aluminum.There are great differences between the poor and rich parts of the population. The average earning of a family is around 600 US Dollars. In the picture to the left you can see a radio station being installed. In Guinea-Bissau, everybody listens to the radio.It is the favorite medium in the region.

Guinea-Bissau used to belong to the proud kingdom of Mali. In the 16th century the first Portuguese arrived on the coast. They created a trade post and began settling here. They colonized the country and began exploiting its resources. This led to a grim fight for independence, which lasted many years. Portugal did not officially recognize Guinea-Bissau’s independence until 1974. Guinea-Bissau is only a small mark on the map of Africa. Why was this colony so important to Portugal? For them it was about influence and their position in the world and international politics.

More on the Mali Kingdom 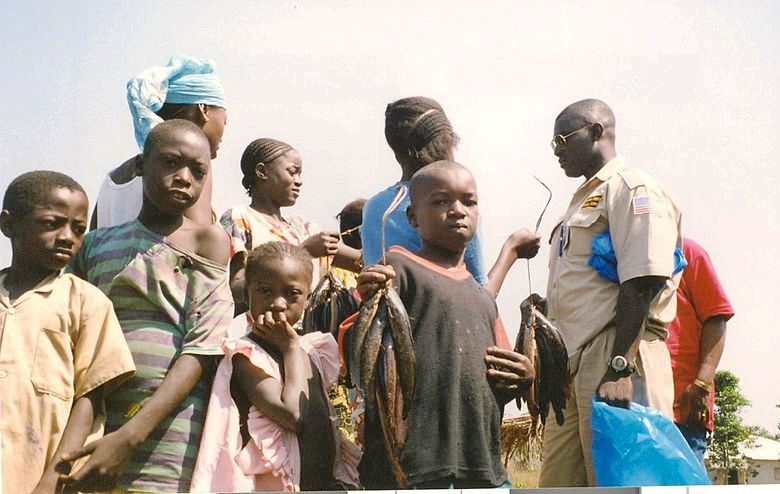 Guinea-Bissau is a presidential republic with a multi-party system. There used to be many conflicts in the country, which led to a long civil war. Since the elections in 2009, the opposition also forms part of the government. Despite the fact, that many parties are involved in the political decisions, the government is presumed to be corrupt. Guinea-Bissau relies on foreign help, since the civil war greatly damaged the country. The health care system is deadbeat and many schools have been destroyed. The biggest problem of Guinea-Bissau is child trafficking. Children are kidnapped and brought to the neighboring countries like Senegal and Mali. They are forced to work in the agricultural sector there or have to beg for the gangs that kidnapped them. The government does a lot to stop this, but it is hard to fight child trafficking. The gangs make billions of dollars off of it.