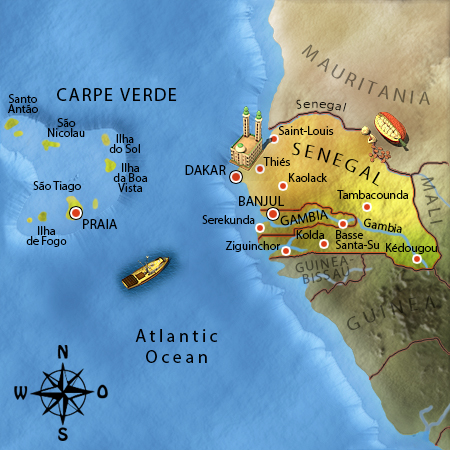 Hello, welcome to Cape Verde, the island state in the Atlantic Ocean!

Cape Verde is located 460km off the coast of Senegal. The island state is made up of ten inhabited islands and five smaller islands. As you can see on the map, the islands are divided into a northwestern group – the Barlavento islands – and a southeastern group – the Sotavento islands. Most islands are mountainous; the highest summit is the Pico do Cano, an active volcano on Fogo. Cape Verde’s flag is just like a representation of the island state. The ten stars stand for the ten inhabited islands. The blue colour represents the surrounding ocean and the red stripe illustrates the position of the islands in the middle of the Atlantic Ocean.

Cape Verde originates from the Portuguese word "Cabo Verde" and means “green rock”. The majority of the islands consist of sand- and salt deserts, because they originate from volcanoes. Only a small part of the land on Cape Verde can be used as farm land. They are dry and barely fertile. Only the island Santo Antão has fertile lands. The inhabitants call it "agricultural island". The island Fogo consists of a single mountain, the volcano “Pico do Fogo”, which is almost 3000 metres high. Pico do Fogo is an active volcano, which last erupted in 1995. Since the island is not inhabited, there were no big destructions. Cape Verde lies in the middle of the Atlantic Ocean, which is why it’s always very windy and dry weather. Only between August and October it rains every now and again.

Praia, the Capital of Cape Verde

The capital  lies on the island Santiago. Once, there was a village here, which was enlarged into an administration centre during colonial times. Streets and colourful houses were built. Even an electricity plant was built, through which the city received electrical street lighting. It was suddenly light at night. The brightness has completely changed people’s lives. Today, Praia is a modern town with a population of about 140.000. It is the economical centre of the state. Coffee, sugar cane and tropical fruits are shipped out of its harbour. Praia also has a fishing industry, in which fish are processed and packed into cans. Close to Praia are beautfiul beaches and the airport. The island's cultural capital is Mindelo with its numerous cafes and bars. Life here starts at night. Way past midnight people are on the go, and make music, act or dance.

The island Fogo consist of a single mountain, the volcano “Pico do Fogo”, which is almost 3000 metres high. Pico do Fogo is an active volcano, which last erupted in 1995. Since the island is not inhabited, there were no big destructions. Cape Verde lies in the middle of the Atlantic Ocean, which is why it’s always very windy and dry weather. Only between August and October it rains every now and again.

Acacias, bushes and other plants, which survive with little water, grow on the islands. The astonishing thing about Cape Verde is its animal kingdom. It consists mainly of survival artist, which can cope with the long dry periods. Before the settlement in the 15th century, bats were the only mammals. Mice and rats arrived onto the island with the first navigators. Slaves brought guenons from west Africa. Geckos, skinks and tortoises have always been indigenous to the islands. Only here the Cape Verde giant gecko can be found, which can weigh up to 50kgs. It is pretty immobile and cannot climb. It rather retracts into caves, where it is safe from enemies. Cape Verde is a true bird paradise. Over 150 different species have been counted. Where there are birds, are also a lot of insects. A beautiful specimen is the wasp spider, so called because of its pretty stripes, as you can see on the image on the left. Did you know? There are no snakes on Cape Verde.

The first inhabitants of the islands were slaves from west Africa. After Portuguese navigators had discovered the islands, traders and farmers settled on them. They intermingled with the African population. The result of this can be seen in the common language “Creole”, which is a mixture of African languages and Portuguese. Almost all people on the island are Catholics. Something you would notice straight away when visiting Cape Verde: the islanders love music. Naturally, cassette recorders play music in every pub and on all markets. Even the bus drivers have their favourite cassettes with them and provide the passengers with Cape Verdean music. Street musicians play traditional music on every corner, but numerous pop musicians are held in high esteem abroad.

On Cape Verde, there are kindergartens and a six-year elementary school. After that, the students get a graduation certificate. The language of education is Portuguese. But for most children, the foreign language is not very hard to learn, as they speak Creole in daily life, a mixture of Portuguese and African. Secondary schools are divided into high school and technical schools. After the 12th year, a final exam is taken and then one can go to university. Classes also take place in the afternoon. That is why school cafeterias were introduced, where students can receive a warm meal.

What do Children play?

Circle games and singing games are very popular, because even the little Cape Verdeans love music. They also hold diving competitions, play football, build sand castles or go surfing. The reliable trade wind blows from November until May! The beaches provide very good surfing conditions, and the sport can easily be learned in the surf clubs.

On the dry lands, coffee, fruit and vegetables, corn, bananas, sugar cane and beans are cultivated. The harvests are so scarce, that almost all foods have to be imported. Most people live off fishing. The men make for deep water, while the women concern themselves with the processing and curing of the fish. Fish and fish products are the main export goods. Except for some fish processing factories, the islands don’t have any industry. A part of the Cape Verdeans works abroad, especially in the US. The beautiful beaches and the excellent surfing conditions are to attract tourists. Tourism is cautiously developed, so more people of the country find jobs.

The markets of Praia and Mindelo attract many tourists. The ethnographic museum in Praia is also worth visiting. Here a lot can be learned about slave trade, which used to be a big part of the islands. One of the oldest buildings in Praia is the barrack Quartel Jaime Mota, where there are still some cannons. But the real sights are under water. Diving enthusiasts can find rare fish and untouched coral reefs here.

On Cape Verde, the same Christian holidays as ours are celebrated, just more cheerful and more frolicsome. The patron saints of the islands are worshipped with big processions. It gets real frolicsome between February and March. At this time, carnival is celebrated in Praia and Mindelo. Carnival is one of the most important celebrations of Cape Verde. The people are dressed beautifully, they go through the streets and dance to infectious rhythms. Visitors from all over the world come to the Gamboa Music Festival on Santiago, because the best musicians of Cape Verde perform there at that time.

Cape Verde was discovered by the Portuguese Diego Gomes around 1445. The Portuguese settled onto the islands and ruled Cape Verde for the next 500 years. Sadly, slave trade was the main source of income on Cape Verde. Only in 1876, slave trade was banished. For a long time, the islanders desired independence from Portugal. They wanted to make their own decisions regarding their country and did not want to pay taxes anymore to the Portuguese occupation force. But only through the peaceful Carnation Revolution in far-away Spain, the island population gained their independence in 1975. In the image on the right you can see the island Santiago and how it looked around 1800.

Cape Verde is a democracy with a division of powers. Elections take place every five years. The president is the head of state and head of the military. There is freedom of press and human rights are respected. Since the independence, schools have increasingly been developing. There are also kindergartens, which, are attended by most children. An important milestone was the introduction of school cafeterias. This way every student gets a warm meal. Surprisingly, the number of school dropouts has decreased enormously. That’s how much of a difference little things can make! The biggest problem of the islanders is that there aren’t enough jobs for everyone. That is why many men emigrate abroad. The women stay in Cape Verde and raise the children.