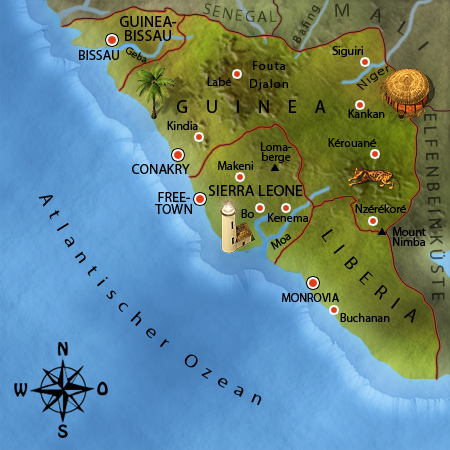 Bonjour, welcome to Guinea, a scenic country in West Africa! 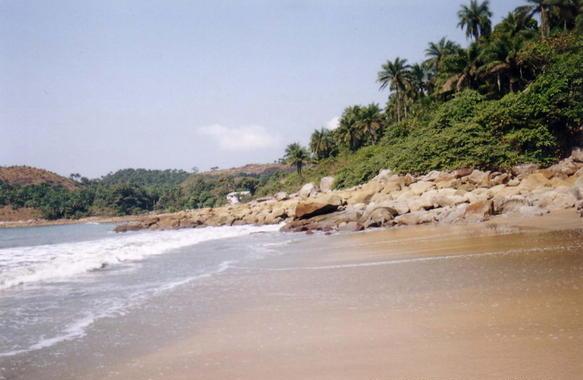 Guinea and shares a coastline with the Atlantic Ocean. The neigbouring countries are Guinea-Bissau, Senegal, Mali, the Ivory Coast, Liberia and Sierra Leone. The climate is tropical so it is hot and humid year-round. The Upper Guinea Rise stretches through the land. The highlands are covered by dense rain forests, in which you can find a great variety of animals and plants. Gallery forests that turn into savannahs cover the plains.

For comparision: The country is about the size of Great Britain. 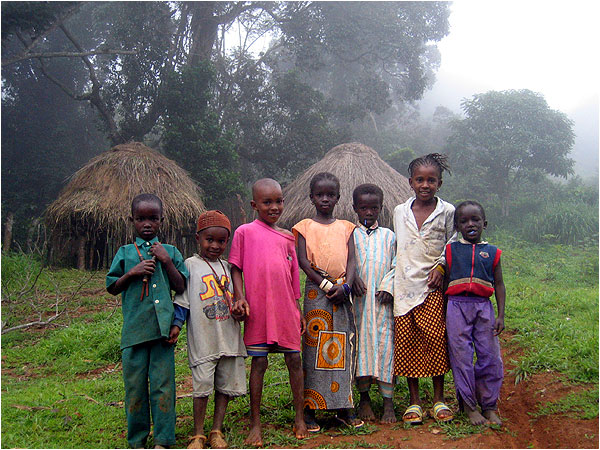 Guinea is nicknamed West Africa's "water tower" because it contains the region's major rivers:   Niger, Gambia, and Bafing. The Niger is the biggest river in West Africa. It winds through the country from west to east and flows in the direction of Mali. The Nimba Mountains are in southern Guinea, on the border to the Ivory Coast. The highest mountain is Mount Nimba, which is 1,752 meters high. The area around Mount Nimba is part of the UNESCO World Heritage program because many rare animal species live here. Nobody is allowed to set foot in this area. If you decide to do so anyway, you face high fines. The children on the right live in the Fouta Djallon mountains. 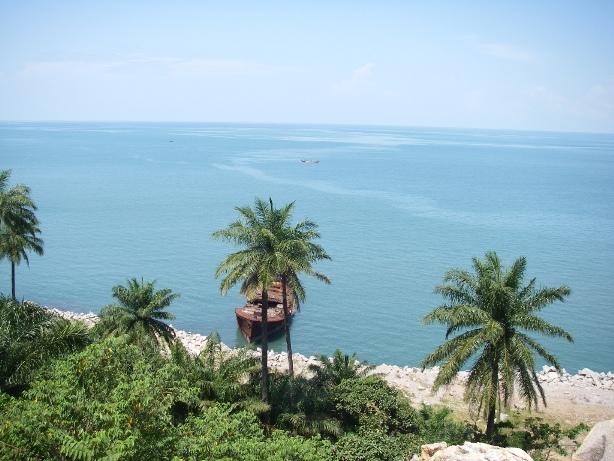 The Iles de Loos is a group of beautiful islands off the coast of Guinea. With its palm beaches, forests and hidden bays these islands attracted adventurers and pirates. These islands were probably even the source of inspiration for Robert Louis Stevenson’s book “Treasure Island”. Today many tourists visit the islands. 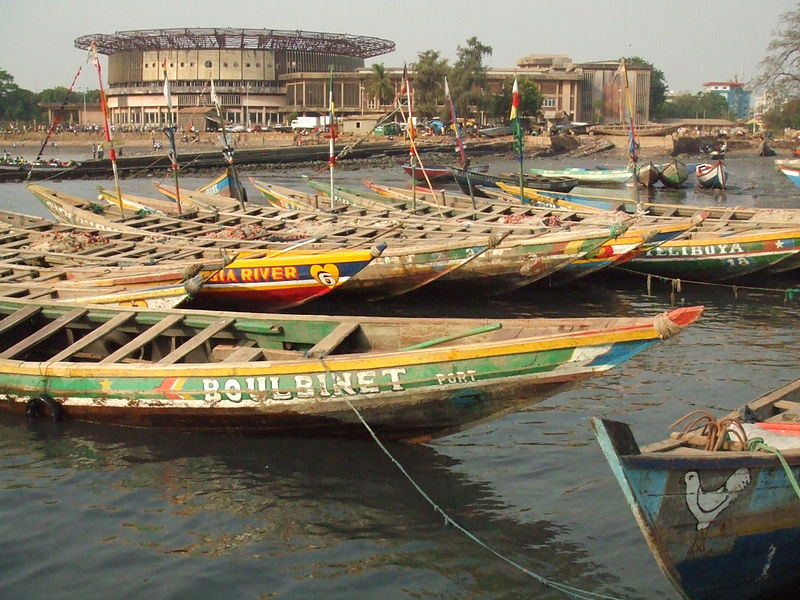 Conakry lies on the coast of the Atlantic Ocean. It used to be a small fishing village; today it is the countries largest city. Especially in the beginning of the 20th century the city attracted many visitors, the city was also named the “Paris of Africa”. Even today there is a merry atmosphere here for there are many live bands performing. There are impressive statues and masks in the national museum that offer insight into the beliefs of the peoples here. The market of the capital is exotic and colorful. You can observe the bustling life of the local traders and farmers and enjoy African specialties. 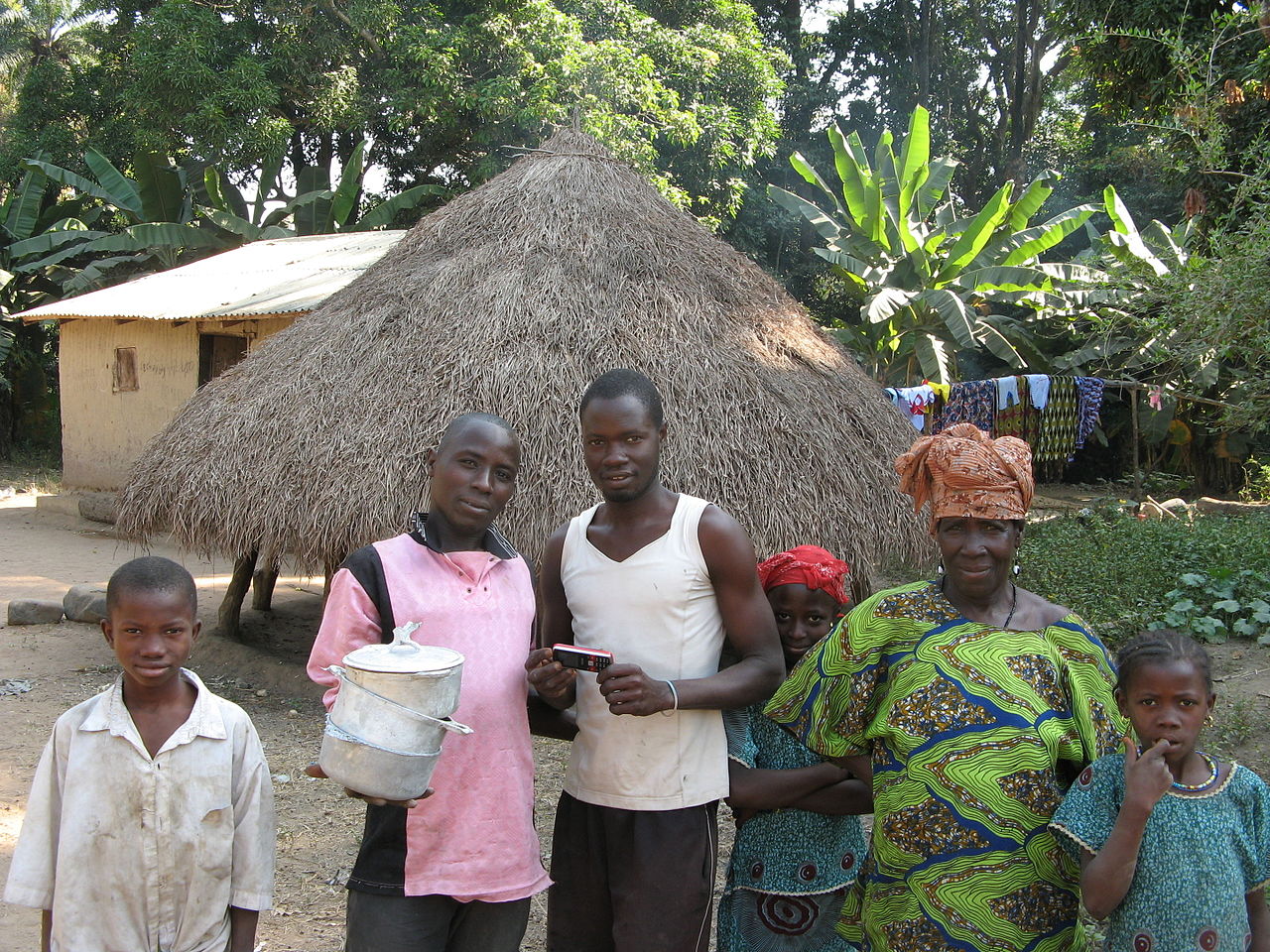 The largest groups of peoples in Guinea are the mandinka, the susu, and the fulbe. The official language is French. In the heart of the country and in the cities you can hear a colorful mix of many African languages. One of the most-spoken languages is Susu, which is spoken on the coast and in Conakry. Most of Guineans are of Islamic belief. The Islamic manners and morals are quite strict here. Women have less education than men. They are prepared for taking care of their family and for motherhood, usually beginning on their 15th birthday when they are forced to marry. Most girls are circumcised; though it is a brutal ritual, most of the girls undergo it because without this procedure they don't get married. The society is strictly separated by gender, especially in the more rural areas. Men are married to several women – this is called polygamy. Women wear long dresses, men usually wear western clothing. You have to watch out if you want to take a picture though: taking pictures of public places like the presidential palace, barracks, air ports, or police stations is not allowed. Many tourists have to pay a hefty “fine” just to get it back.

Islamic holidays and Christian holidays such as Christmas are celebrated greatly within the family. There are parties on the beach and pop concerts. The African Liberation Day is celebrated on May 25th. National holiday is Independence Day on October 2nd. On both of these days there are large festivities and parades in the cities. 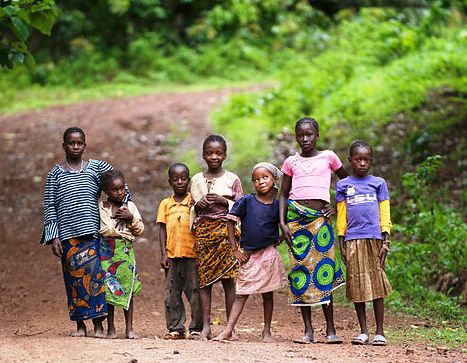 School is mandatory in Guinea but only about half of all children visit school. Especially girls and boys from rural regions do not receive an education. There are not enough schools, teachers, or teaching material. Only a third of students finish  6th grade. Especially girls are deprived of an education here. They have to help out at home at an early age already. The parents believe they do not need an education. The girls will marry and get kids soon anyway. A lot about this attitude has changed recently. One of the reasons for this is, that 15 years ago Islamic leaders began speaking out for the education of girls. Their appeals helped win over the public. Many boys cannot visit school though either; they and their families are too poor. They have to help on the fields, plantations, and with the livestock. This is why more than half of all youths in Guinea can neither read nor write. In some schools the girls learn about sewing, gardening, and home economics. Parents are supposed to be convinced that education is important and useful for their daughters. If everything works out the children are then able to teach their parents some things as well. Some mothers visit school with their daughters so as to learn important life lessons as well. 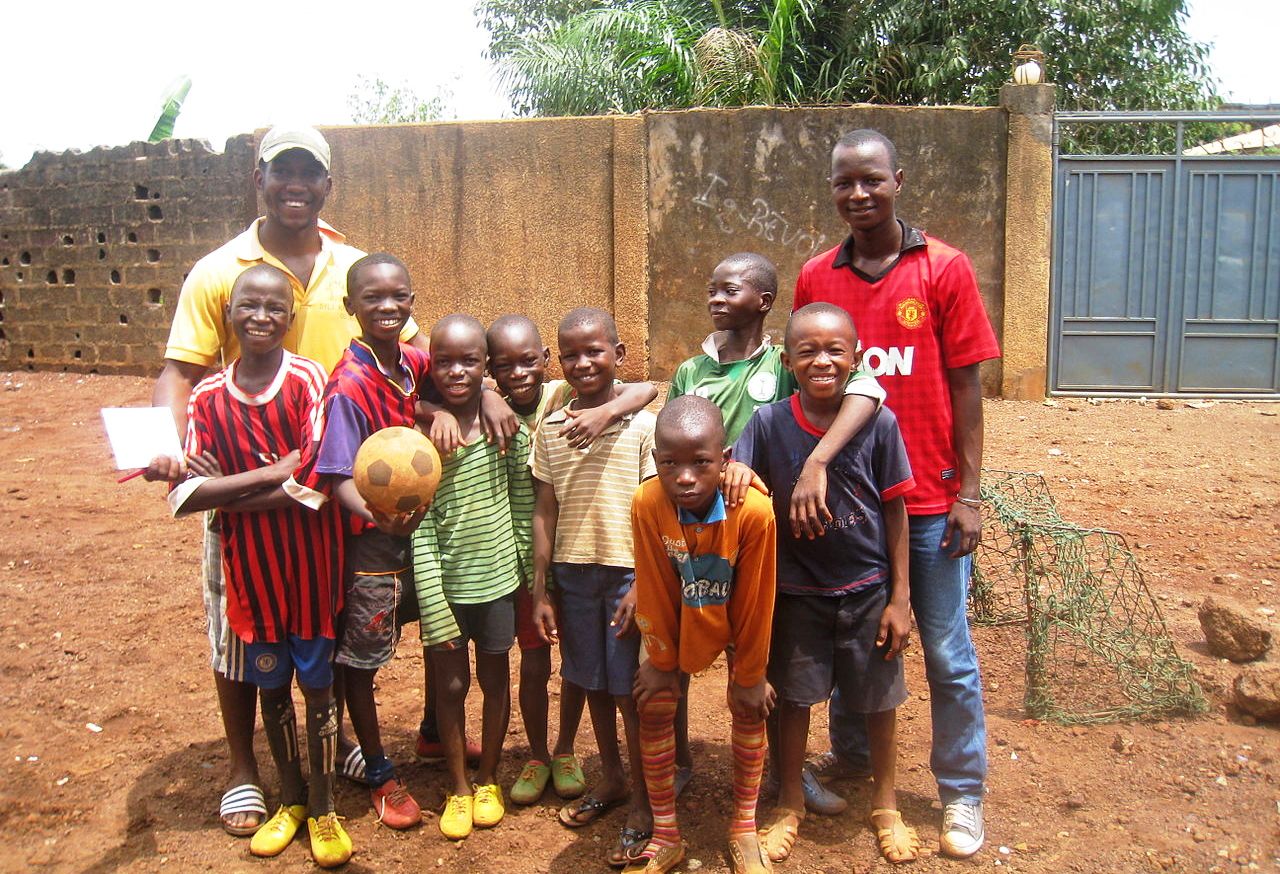 Soccer is the most popular sport and most popular game in Guinea. Even though the national team “Le Sylli National” was never able to win any large titles, they are very popular. Some players come from European clubs and enjoy international prestige. Every boy idolizes the star-players. Soccer balls are made from left over cloth or plastic bags. The kids play bare foot or in rubber sandals. The only thing that matters is shooting goals and having fun. 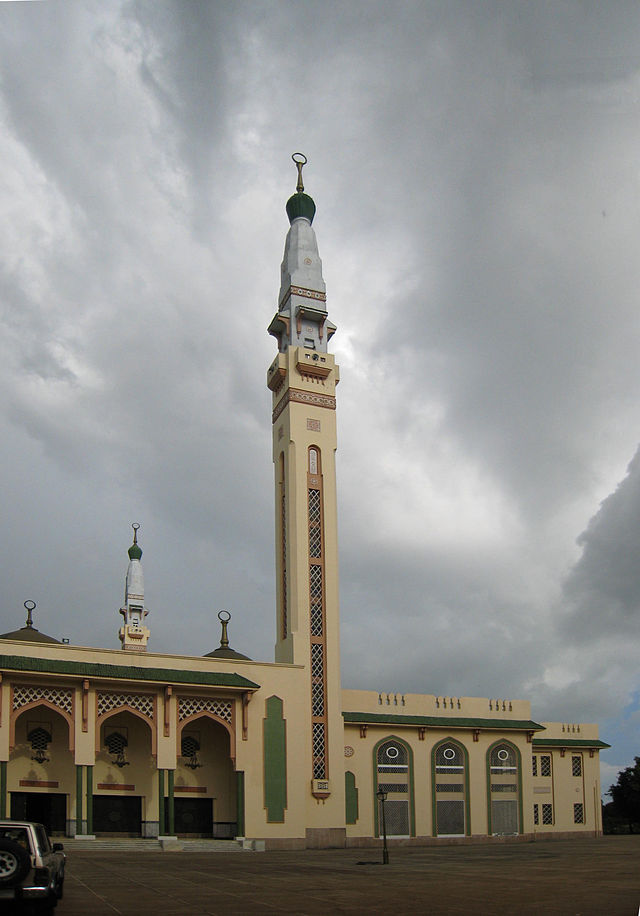 When travelling to Guinea you can visit the Faysal-Mosque, it is the biggest mosque in southern Africa. In the national museum of Conakry you can look at the masks of the old peoples of West Africa. If you enjoy watching animals visit the Fouta Djalon Plateau. It is one of the most beautiful hiking areas in all of West Africa. You will find forest elephants here, the smaller relatives of Jumbo. You can follow their trails and learn about their habits. The Kinkon waterfall is visited regularly as well. The water falls an incredible 150 meters into the depths.

Most people here live off agriculture. They tend to their fields just like their ancestors did hundreds of years ago. They are not able to harvest much and can barely feed their families. Rice, cassava, sorghum, peanuts, and corn are the main crops. Coffee, palm oil, bananas, pineapples, and cocoa are exported as well. Fishing is growing more and more important also. Women contribute to the household. In the picture on the left you can see women with a large net while fishing. The children sell their mothers catches on the markets. Guinea is a rich but also a poor country. Only few African countries possess as many natural resources as Guinea. The country has large amounts of diamonds and gold, which are mined by large corporations such as De Beers from South Africa. There are iron ores and bauxite in the ground here as well. These minerals are very important when making aluminum. Guinea owns almost half of the worlds reserves of bauxite. Uranium was found in the southern part of the republic. 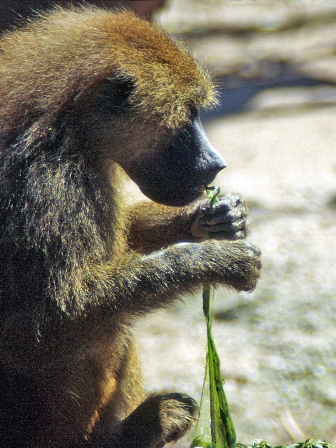 In the gallery forests and the savannahs large wild life such as elephants, antelopes, lions, and gnus can be found. Many colorful birds call Guinea their home. In the lighter gallery forests and the savannah areas lives the Guinea Baboon. He is named after the country and unfortunately belongs to the endangered apes. Due to the richness in water many rare birds and amphibians, which can be found nowhere else in the world live here. For example, you can find the biggest frog in the world here. The world's largest frog can be found in the dense rainforests of Guinea, the Goliath frog.

More about the Goliath frog 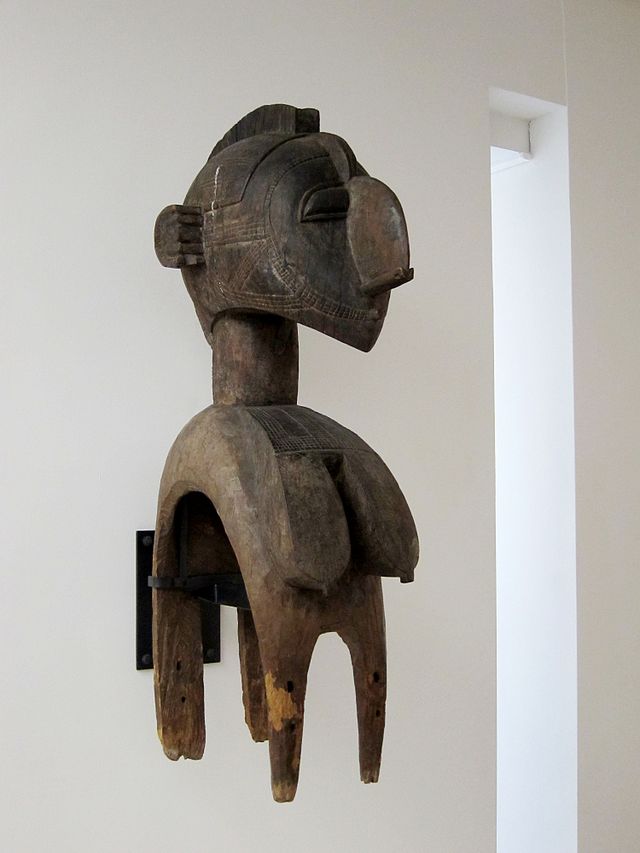 The densely wood areas of Guinea have been inhabited by “fire people” since the primeval times – the pygmy peoples. On the picture on the right you can see a mask of the baga, and old peoples in Guinea that still lives like their ancestors did hundreds of years ago. They inhabited this land before the mandinka and susu came in the year 900. They exiled the other peoples. 1726 the kingdom of Fouta Djallon Fulani was founded. Heart of this kingdom was the city Labé in the center of the country. The religious leader Karamoko Alpha founded it in 1755. Karamoko Alpha spread Islamic beliefs across the country and turned the kingdom into an Islamic theocracy. This meant that the kings believed they were sent by God and wanted to be treated this way as well. Some of the peoples fought back against the Islamic reign in several rebellions. The last king and thus the empire was brought down in 1905. 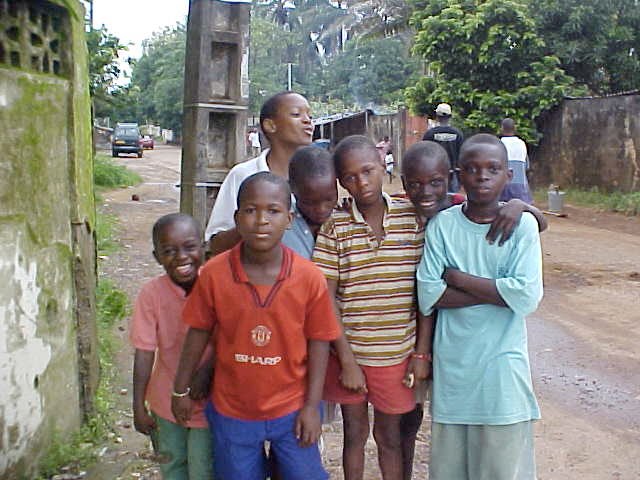 The first democratic elections took place in 2010. Guinea is not politically stable but many things have changed for the better. The new constitution acknowledges the separation of power and has introduced general fundamental and citizen rights. Despite the natural resources Guinea is one of the poorest countries of the world. For this reason the government is trying to ensure that all resources are processed within the country. This is the only way jobs can be created so that everyone can enjoy the riches. Another important job is to improve the education. Especially girls need a good education to be able to decide what they really want. They will probably get married later and choose their partner themselves.