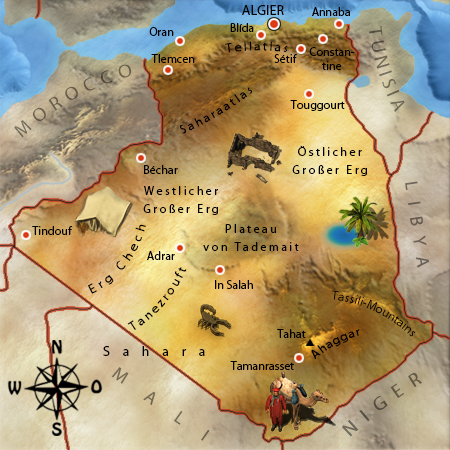 Marhaban, hello and welcome to Algeria, the largest country in Africa.

Algeria lies in North Africa and is the largest country in Africa by extension. It is almost completely covered with desert. Animals and humans can live in only a very few regions, which is why almost all of the 32 million inhabitants of Algeria live on the coast of the Mediterranean Sea. 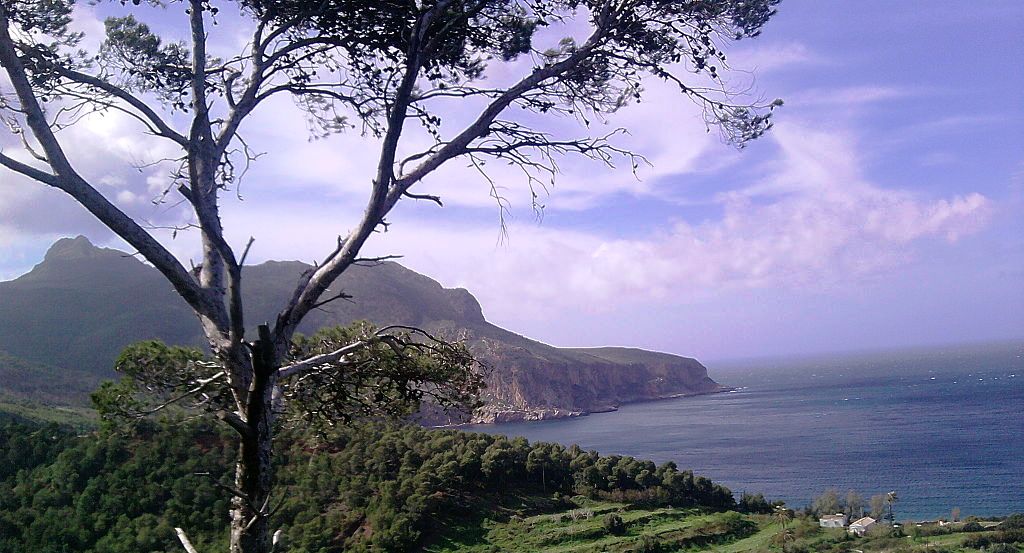 Algeria stretches from the coast of the Mediterranean Sea to far within the continent. The country is shaped like a square, which is why it also has many neighbours: Morocco and Mauritania in the west, Mali and Niger in the south and Libya and Tunisia in the east. Algeria's best farm land lies on the small, hilly, coastal plane and the Atlas Mountains run parallel to the coast. The desert, however, is dominant in the country. The Sahara covers over 4/5 of the country. The coast has a Mediterranean climate, but the interior of Algeria sometimes goes years without rain. The long north-south and east-west routes, which run through the Sahara, cross in Algeria.

The Sahara, the largest Desert on Earth 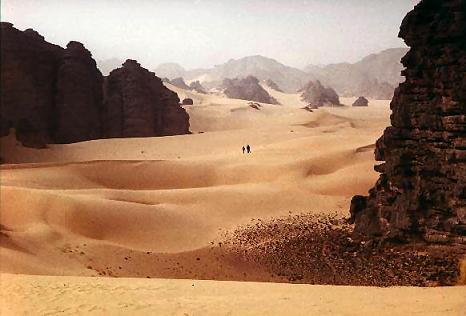 The Sahara in Algeria is very rich in variety. It consists of huge sand dunes, stony, gradual landscapes and the Ahaggar Mountains, a highland region which emerged out of volcanoes. There are many oases, which stretch out like islands in a large sea of sand. The M'zab, a chain of seven Oases, is in central Algeria. Here, date palms, fruit, grain and vegetables blossom. Due to many droughts in the last few years, oases farmers and herdsmen were forced to give up their traditional lifestyles to search for work in the cities.

Algiers, the City of Islands 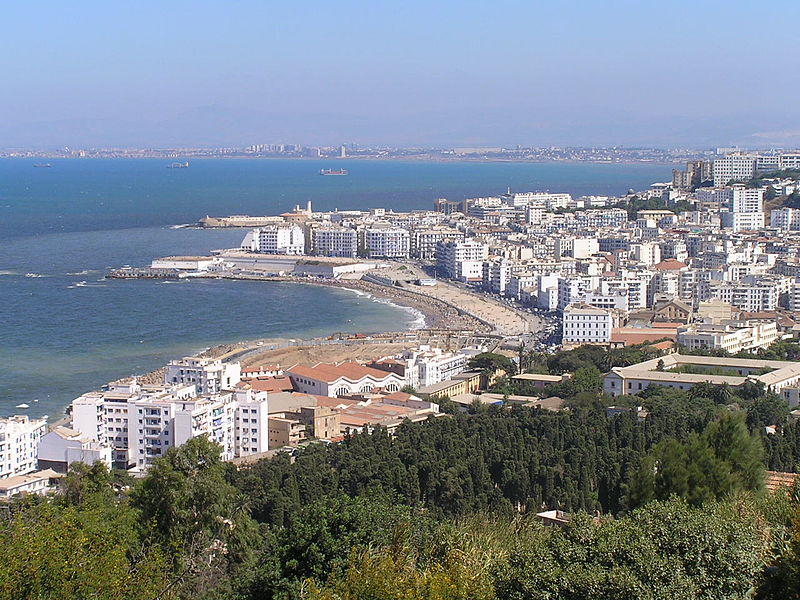 Algiers, the capital city of Algeria, was founded in the 10th Century by Arabs. They named the region for the island which lay just off of the bay. Today, Algiers is one of the greatest cities of the Mediterran region. The city has the largest harbour in Algeria and has a wonderful seafront, remains of the French colonisation. Directly nearby are modern high-rise buildings and industrial complexes. Algiers is encircled in the south by the pine forests of the surrounding mountains. The Notre Dame d' Afrique, a glorious, Catholic chapel, is on a hill, which can be seen from basically all areas of the city. The houses on the seafront look like the small towns in Brittany. The most famous citizen of the city was Albert Camus, a famous author. 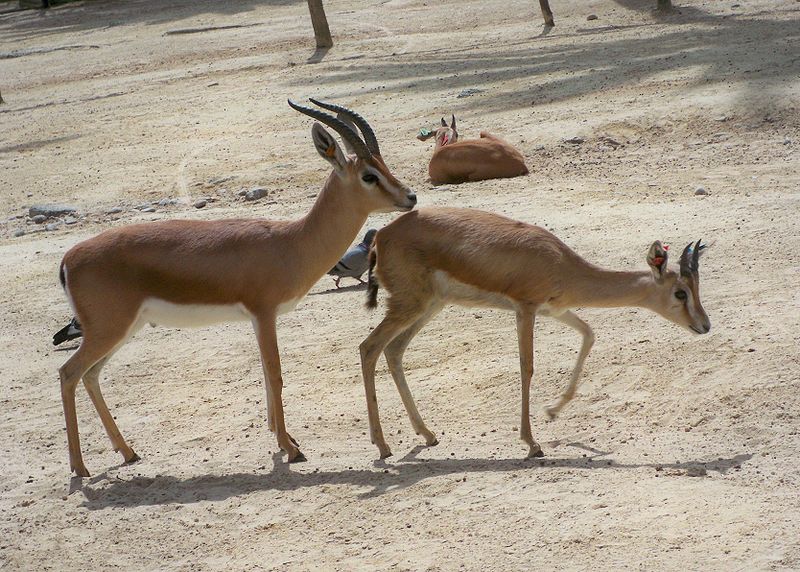 Desert foxes, Barbary sheep and even a few cheetahs can be seen in the national park Tassili n’Ajjer. Sand gazelles and Dorcas gazelles are very rare and are endangered species. Snakes, lizards and spiders live in the desert sands. 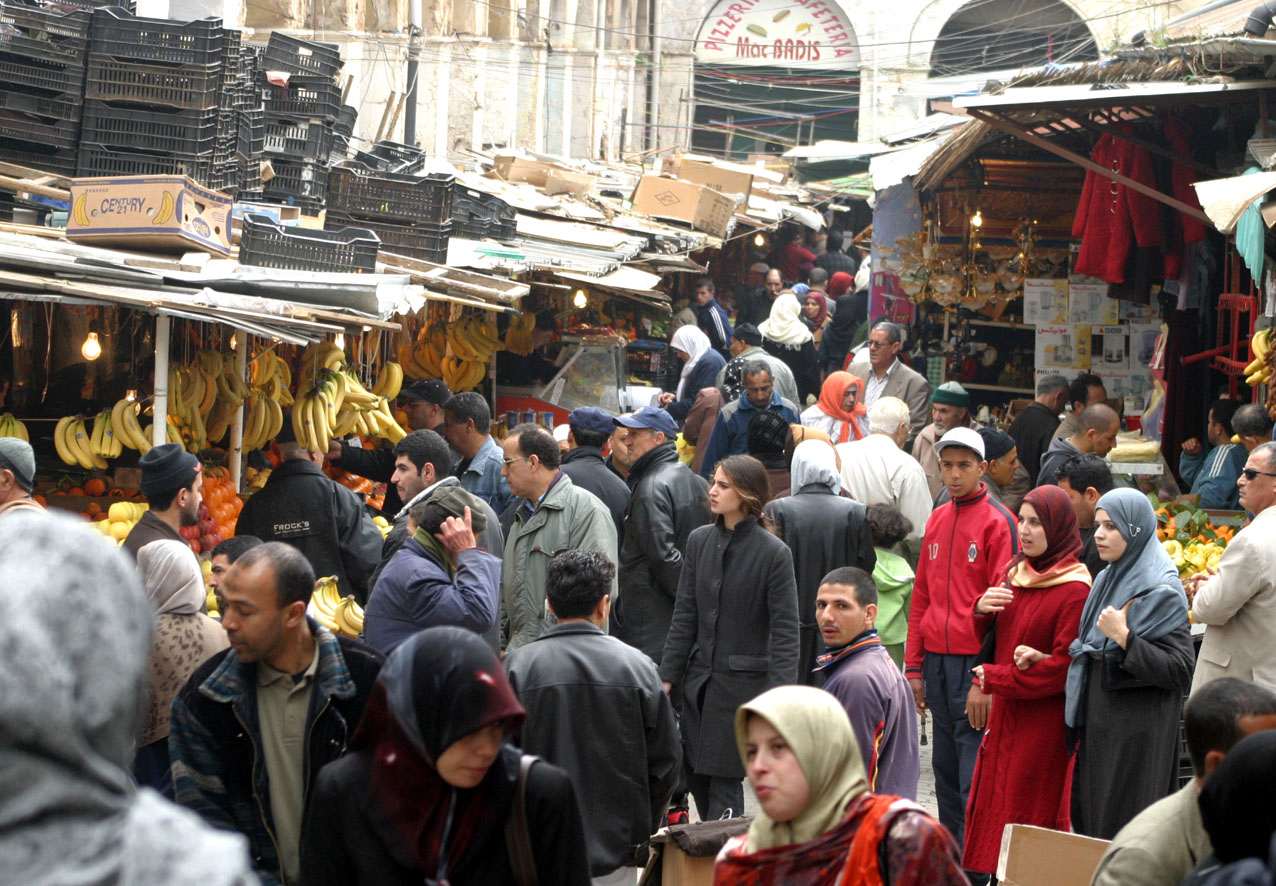 Over the years, they have adopted an islamic lifestyle. In Algeria, you can find the Berber people in old towns called Kasbahs. Here you can play and hide well. The official language is Arabic, but many also speak French. The language of the Berber people is also slowly becoming a national language.

More about the Berber people 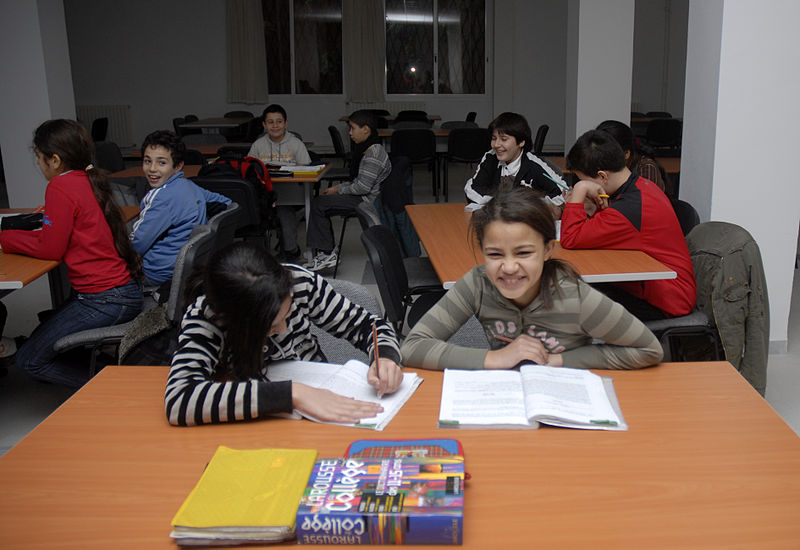 In Algeria, school is compulsory for children between the ages of 6 and 15. Children in cities are well-educated, but the schools in rural areas often aren't well equipped. The biggest difference is between boys and girls. The older generations believe that girls will get married and have children later on. This is why they should learn early on how to run a household, rather than reading and writing. Even though these ideas are slowly changing, lack of education often leads to girls getting pregnant at a young age and having to start a family soon after finishing school. Girls are often already at a young age promised to a man. 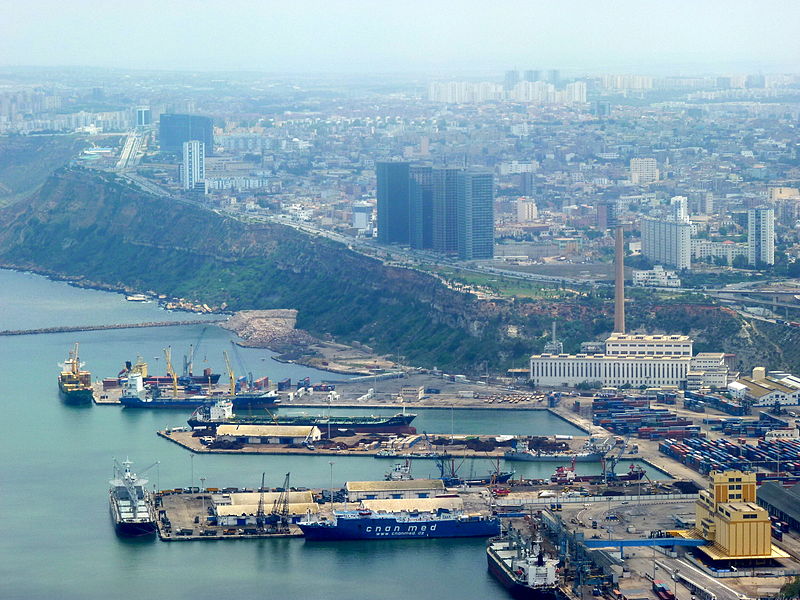 A quarter of the population works in the agricultural industry. Grain, dates, figs ,onions und different kinds of fruit and vegetables are grown. The majority of the people, however, are employed in oil and gas production. Algeria hast the largest oil reserves in Africa and the fifth largest gas reserves in the world. France and Spain get a large portion of their natural gases from Algeria. Despite this wealth, the unemployment rate is high in Algeria. The population also have to put up with high food prices.

The landscape and cities of Algeria mirror its history: thousand year old rock art and primeval gravesites tell us about the very first inhabitants who lived there over fourty thousand years ago. They moved with their cattle herds through the mountainous Tassili. Today, all forts and old towns of the Berber people and their earliest settlements act as evidence. Phoenicians and Romans left ruins of once-magnificent buildings along the coast. But the biggest change happened with the arrival of Islam- cities, which were influenced by the Arabs, and magnificent mosques tell of the islamification of the region.

More about the history of Algeria 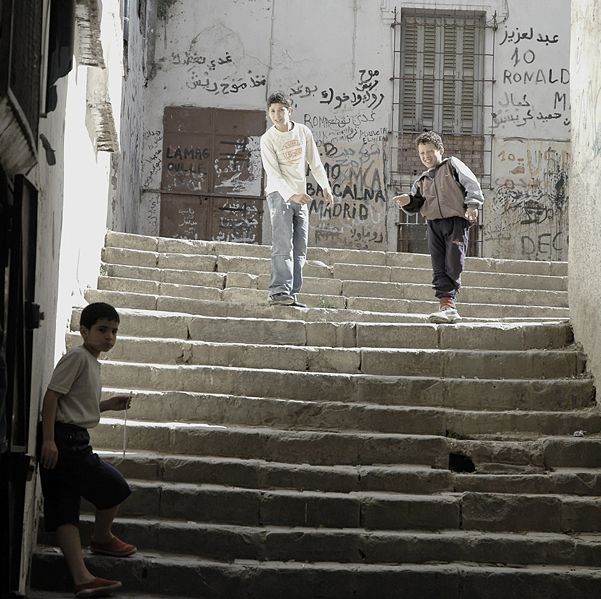 Algeria was dependant on France for over a 100 years. The fight for independance cost many people their lives. The 'Monument des Martyrs' (in the picture on the left) in Algiers is to remind people of the victims of the war. The victory filled the survivors with pride. Winning their independance was like zero hour. Algeria had command over an immense wealth of natural resources and cultural diversity. After many civil wars, Algeria became a presential republic. The state and political party are separate, but the path to a democratic society is still far. Algeria is a torn country- torn between young and old, poor and rich, urban and rural, the capital city and the rest of the country. Two thirds of the Algerians are younger than 15. They feel cheated of their future and cut off from the wealth of the country. A few of them are vulnerable to radical ideals.