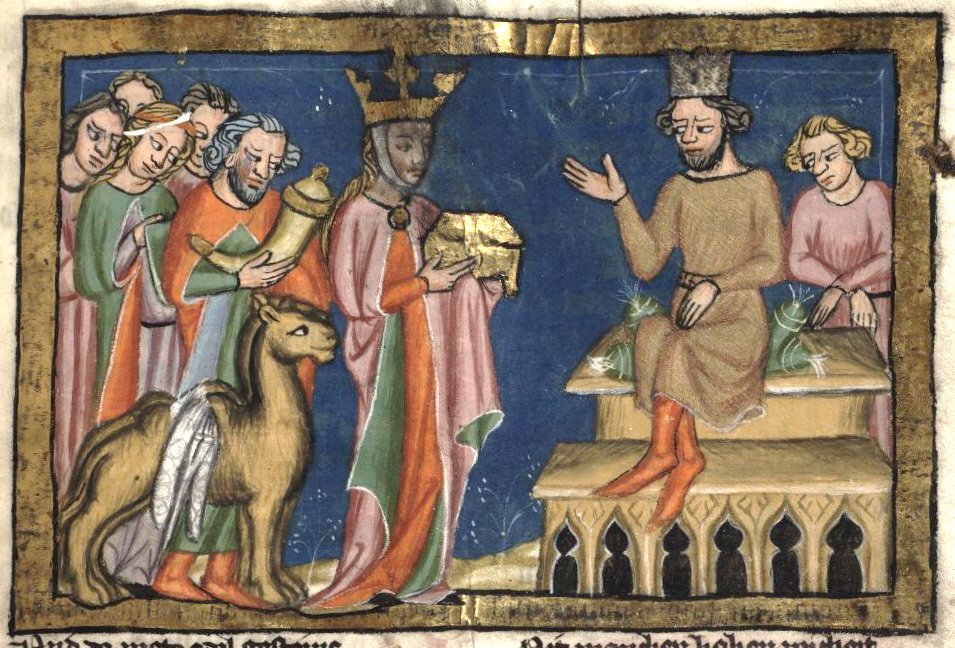 Queen of Sheba was a woman of great wealth, beauty, and power. She is a seeker of truth and wisdom and she has heard that King Solomon of Israel is a very wise man. She travels on camel to Jerusalem to meet him and test his knowledge with questions and riddles. With her she brings frankincense, myrrh, gold and precious jewels.

King Solomon has heard of Sheba and her great kingdom. He has also heard that she has a strange feature, a left foot that is cloven like that of a goat and a hairy leg. Eager to see if the story is true, he has the floor of his court polished until it is like glass. When the Queen of Sheba walks across the floor, Solomon sees the reflection of her cloven foot. Right in front of his eyes, it transforms and becomes normal.

The Queen of Sheba tests Solomon's wisdom, asking him many questions and giving him riddles to solve. He answers to her satisfaction and then he teaches her about his god Yahweh and she becomes a follower. This is how some Ethiopians believe Christianity came to their county. The Queen agrees to stay with King Solomon as a guest. An unmarried woman, she warns the King not to touch her. He replies that in exchange she should not take anything of his. He has tricked her, however. In the middle of her first night she is thirsty and she takes a glass of water. He confronts her and tells her that by breaking her agreement she has released him from his. They spend the night together and when she returns home from his kingdom, she is pregnant with a son.

She raises her son Menelik on her own. When he grows up, Menelik decides that he wants to meet his father and travels to Israel to meet King Solomon. When he returns, he takes with him the Ark of the Covenant, the sacred container that contained the Ten Commandments. In Ethiopian legend, the Ark has remained in Ethiopia ever since and Ethiopians see Menelik as the first in an unbroken line of Ethiopian kings that stretches into the 20th century.

Did you know? The Queen of Sheba appears in religious texts sacred to Jews, Christians, and Muslims. Where did Queen of Sheba really come from?  In the Bible she is described as a Queen of the East. But modern scholars believe she came from the Kingdom of Axum in Ethiopia, or the Kingdom of Saba in Yemen.