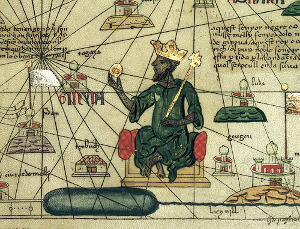 For many generations, the griots have told the story of the powerful King Sundiata Keita. Their story about the legendary lion son dates from the 13th Century. It describes the rise of a hero in West Africa.

A long time ago, Maghan the Handsome was chief of a  small Mandinke tribe in within the Ghana Empire. He was loved by his people and had many wives. One day, a hunter came from far away to visit the chief. The hunter asked him to marry a woman called Sogolon. Chief Maghan asked, "why should I marry a woman I do not know just because a stranger has told me to?" The hunter told him that Sogolon would bear him a son who will become the greatest king ever to rule the kingdom. Like most Malians, the chief believed in fate and destiny, and listened to the advice of the hunter. Sogolon was called "the Buffalo Women" she was ugly, she beared on her back a disfiguring hump. Her monstrous eyes seemed to have been merely laid on her face. Even though Sogolon was very ugly, the chief married her.

Sogolon gave birth to a son.  He was named Sundiata. But as the boy grew older they realised that he couldn’t use his legs. At the age of three he still crawled along on all-fours while children of the same age were already walking. He had nothing of the great beauty of his father Nard Maghan. His head was so big that he seemed unable to support it; he also had large eyes which would open wide whenever anyone entered his mother's house. He was taciturn and used to spend the whole day just sitting in the middle of the house. Whenever his mother went out he would crawl on all fours to rummage about in the calabashes in search of food, for he was very greedy.

Chief Maghan became very sick when Sundiata was still a young boy. Knowing his days were numbered, the king called Sundiata to his bedside. He told his son, “when I go, you will be king. You are destined for greatness, my boy!” But after chief Maghan died, his first wife had a different plan. She was called Sassouma, and she believed that her son, Dankaran should be king. Sassouma spread tales about Sundiata so that people wouldn’t accept him. The gossip worked and Dankaran became chief instead. Sundiata was forced to flee with his mother.

Living far away in a foreign land, Sogolon became very unhappy. She said to her son, "Sundiata, you must know that I love you dearly, but I am worried about your future.  You are a strong boy and have a great heart, but your legs have allowed Sassouma to take control.  We cannot let Dankaran be chief - it is against your father’s wishes!"  Sundiata felt sad but he had great courage and determination. Using two iron rods from a blacksmith, Sundiata used all his strength to pull himself up. Gradually, his legs started to grow, and within minutes he was standing on his own two feet.

The young Sundiata grew into a man and became famous for his strength and charm. He had many admirers. In the meantime, Sassouma and Dankaran had lost control of the chiefdom to a wicked wizard called Soumaoro. An old friend, called Balle Fasseke told Sundiata how Soumaoro had magical powers over the people of Mali, and how he even displayed the skins and skulls of his enemies as treasures in his chamber.

Sundiata was determined to go back and free his people of the terrible wizard. Balle Fasseke gave his friend a special arrow. He said, Soumaoro would only lose his evil magic if he was scratched by this arrow.  Trusting his friend, Sundiata set off to fight Soumaoro, joined by hundreds of his friends and supporters. There was a long and fierce battle but Sundiata’s determination and patience paid off. Soumaoro was wounded by the special arrow and lost all his power. The wicked wizard fled, never to be seen again.

Sundiata was finally crowned king, and his adoring people called him, “the lion king of Mali” because of his strength and courage. Sundiata’s reign was a long and happy one, and he became the greatest king ever to rule the kingdom of Mali.