Around 6 000 BC the climate in Africa changed dramatically. It became hotter and drier, the desert was spreading out. The hunter-gatherer peoples found less and less food on their hikes.

The Nomads of the Sahara learn to domesticate Animals 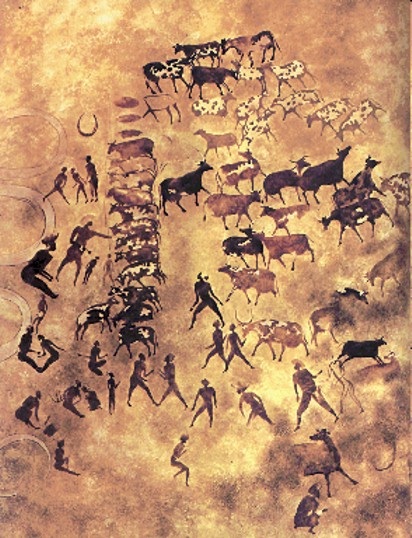 The rock drawings of cattle in the Air Mountains and in Tassili n'Ajjer in Algeria, date back to 5000-2500 BC. They tell us that the time of the hunters and gatherers ends around 2500 BC at the latest. At that time, the Sahara Desert is still steppe. The nomads are familiar with the way of life in the steppe. They start breeding cattle and domesticate donkeys and goats as well. The drawing on the right implies a defining step of their cultural development. The inhabitants of the Sahara artfully decorate the horns of the animals. They attach bars between the horns, probably to transport goods and equipment. Some of the animals are equipped with saddles and hampers. These people are no longer nomads, like the hunting tribes before them. They live as shepherds, who move with their possessions from one pasture ground to another, very similar to the folk groups among the European latitudinal lines. It is a mystery, where these first inhabitants of the desert came from.

The first Settlements on the Banks of the Nile

The people of early civilizations needed water for drinking and for their crops, so they settled near rivers.  Some settled down on the banks of the Nile river. The Nile was essential to the development of the first African settlements. Every year the river gently flooded the valley, enriching the soil with silt and minerals. This fertile black soil made it possible for the people to grow a wide variety of foods. The people replaced their nomadic culture with the settled life of farmers. They began building permanent homes. The first cities were formed. People began using metals, such as copper and bronze, instead of stones to make tools. Then, around 3000 BCE, they created a system of letters and began to write. This new form of living was called civilization.