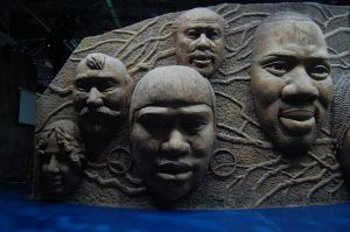 In the early 20th century the African peoples wanted to get rid of colonial rule. Furthermore in Africa churches provided schools and increasing numbers of Africans became educated. They became impatient for independence. Certain European nations and governments did not want to release their territories, resulting in wars of independence for some African countries. But the movement for African independence became unstoppable. The first country to become independent from the British rule was Ghana in 1957. By 1960 most African countries became independent. However Mozambique and Angola did not become independent until 1975. The leaders of Ghana, Mali and Zimbabwe decided to rename their countries after the kingdoms who once reigned in their land.

The various African Peoples speak with one Voice

The first steps to independence were full of hopes and expectations. But there were also tensions and struggles. country boundaries created by the Europeans often grouped together African peoples with different ethnic, religious and political backgrounds. That's why tensions between different groups led to a number of civil wars. Only three years after independence the leaders of 30 African nations came together in Addis Abeba and decided to constitute an organisation for African unity. It was the first time, that the various African peoples were speaking with one voice.