Life on Earth developed about 3.5 Billion years ago. Yet only about 6 Million years ago, the development of a humanoid being began. These prehistoric human beings were quite similar to great apes. They climbed trees to eat fruits and to find safety from dangerous predators. However, they already walked like we do; on two legs. That is why they were named Homo erectus, the “upright-walking”. The shape of their head was compact, they had noticeable bulges over their eyes and their forehead was flat. Their brain was not very developed, yet. Nevertheless, they were already able to work with stones and use them as tools.

Lucy, one of the first upright walking Humans 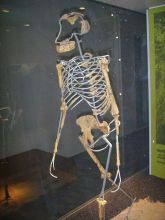 The oldest remains of our ancestors were discovered in the rocks and grounds of the East African rift valley and in limestone caves in South Africa. In the Olduvai Gorge in Tanzania as well as in Kenya and Ethiopia, the oldest human bones were found. Close to those, processed stones were located. These stones were in the form of hand axes, which served as tools to disassemble game and to open hard-shelled fruits and nuts. Because of these tools, this era is called the Old Stone Age, or Palaeolithic Age. Researchers dug out Lucy’s skeleton, which can be seen on the image on the left, in Ethiopia. It is about 3.5 million years old.

The Child of Taung and his Secret about the first Humans

In the South African village Taung, a younger relative of Lucy was found; the “child of Taung”. This fossil is more than 2 million years old. Researchers assume that the child embodies an intermediate form between great apes and humans, as he indeed has a pithecoid, thus ape-like face, yet his brain and teeth were humanoid, so human-like. The child was probably only 4 years old, when he died. How did he die? Traces of hacking by big raptorial birds, which also hunted chimpanzees, were found in his skull. They had preyed the child somewhere far away from Taung and displaced him to their nest. These human-like remains were the only ones found in Taung. All the other remains of fossil bones originated from monkeys and other prey.

Refined tools such as stone axes and decorated animal bones, which were found alongside a river in Ethiopia, tell of an intelligent descendant of Homo erectus. This descendant lived about 800 000 BC. He could make fire and cook his food, hereby consuming bigger amounts of protein-rich food, making his brain grow. Skull findings with a higher forehead testify to this progression of “Homo sapiens”. From that point on the development went rapidly. The humans began to abstract, they painted pictures in caves and on rocks. The even began to craft trinkets. The nomads came to be hunters and gatherers.

Out of Africa - the human Journey

One of the last ice ages lasted about 60 000 years ago, making food hard to find. Our earliest ancestors had to adjust to the changed climate or leave the area. Some of them did exactly that. They left the African Continent and went towards India and Asia. They probably followed animal herds that were looking for fertile pasture grounds.   They were well equipped, as they possessed elaborate tools and could make fire. This way, they could conquer and settle on all continents. On their way, these people have left genetical traces. These traces can be found in the genes of most people today. This implies that we are al Africans.

Why are we not all black?

Presumably, our European ancestors also had a black skin colour. American geneticists have found that the white skin colour only emerged long after the arrival of the modern human being in Europe. In the Young Stone Age, the descendants settling in India, Asia and Europa slowly grew paler.